The number of people threatened by climate change-related flooding is three times higher than previously thought, according to new research.

A study published by Climate Central in Nature Communicationssuggests that 300 million people will live in low-lying areas vulnerable to chronic flooding by 2050, and that 200 million people could fall permanently below the high tide line by the end of the century.

Climate Central said past estimates fall short because the topographical data had incorrectly measured the elevation of land, particularly within the developing world. The study found much more low-lying land worldwide than previously thought.

The problem with elevation estimates

In the U.S. and other nations, airborne lidar radar is used to accurately measure the elevation of land. But, considering the cost of technologies like lidar, not all countries measure topography. For these areas, NASA’s Shuttle Radar Topography Mission (SRTM) has used space-based radar technology to get a general idea of land elevation throughout the world.

The problem is that this technology often mistakes trees, or other objects protruding from the ground, as land.

“As a result, SRTM data generally overestimate elevation, particularly in densely forested and built-up areas,” Climate Central wrote in a report. “In low-lying parts of coastal Australia, for instance, SRTM data overestimate elevation by an average of 8.2 feet (2.5 meters). Globally, the average overestimate appears to be roughly six feet (two meters). These values match or exceed most of the highest sea level rise projections for the entire century.” 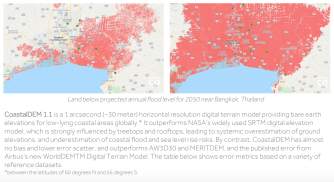 To get a new (and hopefully more accurate) picture of land elevation across the planet, Climate Central combined SRTM data with machine-learning techniques. The results suggest coastal regions in Asia are especially vulnerable to flooding caused by sea-level rise, according to the report.

“Sea level rise is a global story, and it affects every coastal nation. But in the coming decades, the greatest effects will be felt in Asia, thanks to the number of people living in the continent’s low-lying coastal areas. Mainland China, Bangladesh, India, Vietnam, Indonesia, and Thailand are home to the most people on land projected to be below average annual coastal flood levels by 2050.”

Astrophysicist claims “dark fluid” fills the missing 95% of the Universe