A new ultrasound treatment by UCLA scientists was used to restart brain activity in a 25-year-old man recovering from a coma. Before the treatment, the man showed few signs of consciousness and understanding speech, able to perform very limited movements. Three days after the treatment, the man could fully understand language, communicated by nodding his head and even fist-bumped one of the doctors.

“The changes were remarkable,” said Martin Monti, the study’s lead author and a UCLA associate professor of psychology and neurosurgery.

He elaborated on the technique which used a sonic stimulation device to excite neurons in the thalamus, the brain’s central processing hub. It is the area with a typically diminished performance in post-coma patients.

“It’s almost as if we were jump-starting the neurons back into function,” Monti said. “Until now, the only way to achieve this was a risky surgical procedure known as deep brain stimulation, in which electrodes are implanted directly inside the thalamus. Our approach directly targets the thalamus but is noninvasive.”

The device used is the size of a coffee cup saucer. According to the UCLA press release, it “creates a small sphere of acoustic energy that can be aimed at different regions of the brain to excite brain tissue”. 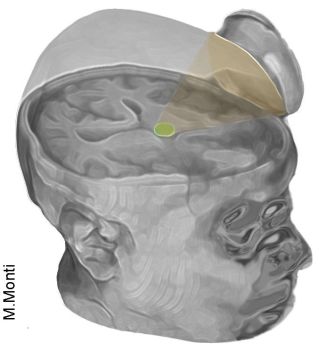 Both the device and the technique, called low-intensity focused ultrasound pulsation, was developed by another UCLA professor Alexander Bystritsky. He is the co-author of the study and founder of Brainsonix, a company that made the device.

The small amount of energy emitted by the device is safe for the patient.

Can this technique be used to help other patients recovering from comas? The researchers are taking a wait and see approach. More studies need to be done to see if they can get consistent results. UCLA researchers will be testing the procedure on several more people in the fall.

“It is possible that we were just very lucky and happened to have stimulated the patient just as he was spontaneously recovering,” cautioned Monti.

Monti hopes that if the technology pans out, their research will lead to the creation of low-cost portable devices that can “wake up” the brain of vegetative or minimally conscious patients.

You can read the report on the treatment here, in Brain Stimulation.

The first human that isn’t an Earthling could be in our lifetime.
▸
5 min
—
with
Robert Curbeam
Up Next
Health

The Bad News: Trauma Can Be Inherited. The Good News — So Can Resilience

This discovery could lead to a whole new class of drugs for psychiatric disorders.