I’m determined to age gracefully. Though my wife plucks every gray hair she finds, I’d be bald if I did. Even so, I’ve kept myself up over the years, prompting my college girlfriend, whom I recently reconnected with to exclaim, “You haven’t aged at all!” Except for more gray hair, that is. Perhaps it’s just good genes. I’ve always chalked it up to stress-free living. So what can be done to overcome the aging process? Creams, lotions, and other products fill pharmacy shelves, but few have a truly substantial impact.

Now, researchers at the Salk Institute in La Jolla, California have discovered a way to turn back the hands of time. Juan Carlos Izpisua Belmonte led this study, published in the journal Cell. Here, elderly mice underwent a new sort of gene therapy for six weeks. Afterward, their injuries healed, their heart health improved, and even their spines were straighter. The mice also lived longer, 30% longer.

Today, we target individual age-related diseases when they spring up. But this study could help us develop a therapy to attack aging itself, and perhaps even target it before it begins taking shape. But such a therapy is at least ten years away, according to Izpisua Belmonte.

Many biologists now believe that the body, specifically the telomeres—the structures at the end of chromosomes, after a certain time simply wear out. Once degradation overtakes us, it’s the beginning of the end. This study strengthens another theory. Over the course of a cell’s life, epigenetic changes occur. This is the activation or depression of certain genes in order to allow the organism to respond better to its environment. Methylation tags are added to activate genes. These changes build up over time, slowing us down, and making us vulnerable to disease. 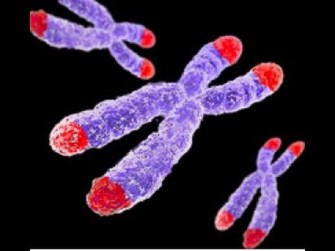 Chromosomes with telomeres in red.

Though we may add life to years, don’t consider immortality an option, at least not in the near-term. “There are probably still limits that we will face in terms of complete reversal of aging,” Izpisua Belmonte said. “Our focus is not only extension of lifespan but most importantly health-span.” That means adding more healthy years to life, a noble prospect indeed.

The technique employs induced pluripotent stem cells (iPS). These are similar to those which are present in developing embryos. They are important as they can turn into any type of cell in the body. The technique was first used to turn back time on human skin cells, successfully.

By switching around four essential genes, all active inside the womb, scientists were able to turn skin cells into iPS cells. These four genes are known as Yamanaka factors. Scientists have been aware of their potential in anti-aging medicine for some time. In the next leg, researchers used genetically engineered mice who could have their Yamanaka factors manipulated easily, once they were exposed to a certain agent, present in their drinking water.

Since Yamanaka factors reset genes to where they were before regulators came and changed them, researchers believe this strengthens the notion that aging is an accumulation of epigenetic changes. What’s really exciting is that this procedure alters the epigenome itself, rather than having the change the genes of each individual cell. 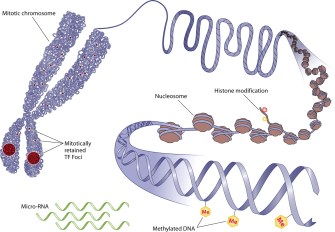 The mechanics of epigenetics.

In another leg of the experiment, mice with progeria underwent this therapy. Progeria is a disease that causes accelerated aging. Those who have seen children who look like seniors know the condition. It leads to organ damage and early death. But after six months of treatment, the mice looked younger. They had better muscle tone and younger looking skin, and even lived around 30% longer than those who did not undergo the treatment.

Luckily for the mice, time was turned back the appropriate amount. If turned back too far, stem cells can proliferate in an uncontrolled fashion, which could lead to tumor formation. This is why researchers have been reticent to activate the Yamanaka factors directly. However, these scientists figured out that by intermittently stimulating the factors, they could reverse the aging process, without causing cancer. The next decade will concentrate on perfecting this technique.

Since the threat of cancer is great, terminally ill patients would be the first to take part in a human trial, most likely those with progeria. Unfortunately, the method used in this study could not directly be applied to a fully functioning human. But researchers believe a drug could do the job, and they are actively developing one.

“This study shows that aging is a very dynamic and plastic process, and therefore will be more amenable to therapeutic interventions than what we previously thought,” Izpisua Belmonte said. Of course, mouse systems and human one’s are far different. This only gives us an indication of whether or not it might work. And even if it does, scientists will have to figure out how far to turn back the clock. But as Izpisua Belmonte said, “With careful modulation, aging might be reversed.”

The Vertebrate Genomes Project may spell good news for the kakapo and the vaquita.
Health

“The question is which are okay, which are not okay.”
▸
14 min
—
with
Big Think
Health

What makes some people more likely to shiver than others?
Health

Watch first ever dancing DNA video made by researchers

Scientists use high resolution microscopy and computer simulations to create first ever video of DNA movements.
Up Next
Starts With A Bang

Ask Ethan: How do I become an astrophysicist/astronaut?