Ancient and near ancient records are often less than trustworthy. Even if you ignore the parts with reports of seamonsters or ants that minegold, certain events often seem exaggerated. If we trust what the Greekswrote, we’d have to assume Persia invaded with an impossibly high percentage of their entire population. The Romans, fond of showing how horrible the people they subdued were, spoke of the Celts using the Wicker Man for human sacrifice, though we can find no hard evidence of Wicker Men having existed.

You can probably understand why most historians take certain claims with a grain of salt, especially when those claims talk about dramatic events.

One seemingly mundane area this includes is the weather. What one person might record as an unprecedented weather event another person might think of as normal. Determining which account is correct a thousand years after the fact can be difficult, assuming that neither of them was exaggerating in the first place.

Luckily, as science marches on, it can provide new ways to investigate the past. An international team of researchers has managed to use isotopes from stalagmites in Northern Italy to better understand what the weather was like in the sixth century and to provide evidence for some fantastic historical records.

Ancient truths hidden in a cave

In a recentstudy published in Climatic Change, researchers investigated stalagmites in a cave in Tuscany. Stalagmites, which are the pointy rock formations on the ground in caves, provide a record of the environmental conditions they formed in. By examining different parts of the stalagmites, the team could determine what the climate was like, for instance if it was wetter or drier than normal, at different points in history. Uranium-thorium dating was used to provide precise dates for these points.

Oxygen isotope ratios were then measured to distinguish between wetter and drier periods. Combining this with the uranium-thorium data, the researchers could compile a timeline of climate activity over several hundred years. The oxygen isotope ratios in the sixth century indicated unusually wet weather.

The authors speculate that the moisture could have come from the North Atlantic Oscillation’s negative phase, which tends to push moist air into Italy.

The water miracles of the Italian saints 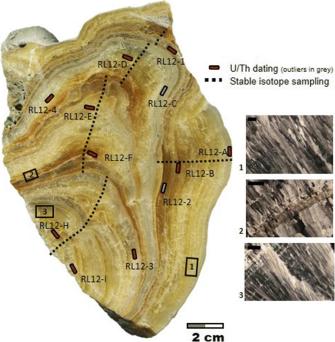 Stalagmite Sample RL12, which was the focus of this study. Points on the sample that were used for dating and isotope collection are labeled. Zanchetta et al

While these findings provide strong evidence for lots of rain in Sixth Century Italy, this isn’t the first report to suggest that the weather might have been extreme at the time.

Records of the saints from that time feature numerous examples of holy men somehow controlling troublesome water. One, the tale ofSt. Frigidian, features the saint successfully commanding the Serchio river to flow into a raked track he created, saving Lucca from flooding. A fifth of the miracles described in the Dialogues on the Miracles of the Italian Fathers, a record of saints, are “water miracles” of this kind.

While it is true that some of the most noteworthy miracles in the Bible involve water , such as the parting of the Red Sea by Moses, the miracles described in Dialogues are often unique feats with no obvious literary precursor, suggesting that they aren’t repeats of existing stories in a new setting.

Additionally, French religious documents from the same period have no similar emphasis on water miracles. This suggests, though does not prove, that the Italians had separate motivations for listing so many of them.

Does this mean we can start trusting any old document?

Co-author Robert Wiśiewski of the University of Warsaw explained how documents like the Dialogues can be used to help improve our understanding of history:

“Literary sources, in particular stories about saints, should not be taken as a direct record of past events, They do, however, reflect the worldview of church writers and the basis for their interpretation of extraordinary weather phenomena.”

The spikes in their mouths would have helped them catch squid or fish.
Up Next
Communication

It’s the early 20th century, and you are the captain of a ship. A barquentine specifically—three masts and a coal-burning steam engine in her belly. She’s a sturdy and capable […]