When expressed in physics terms, one of the most important human questions of “Why do I exist?” can be expressed as “Why is there more matter than antimatter?” In other words, during the Big Bang, a tremendous amount of antimatter was created, which could have cancelled out the matter. So why didn’t it? In a newly published study, scientists came closer to understanding the answer by measuring properties of neutrons with unprecedented precision.

The team looked at whether a neutron, a fundamental particle of the Universe, can act as an “electric compass” by measuring its EDM (Electric Dipole Moment). This property results from the somewhat asymmetrical shape of a neutron, which is slightly positive at one end and slightly negative at the other, making it like a bar magnet, as explains the press release from the University of Sussex.

Explanations related to matter left over after the Big Bang predict the existence of such “electric compasses” in neutrons, and understanding this phenomenon is essential to figuring out why matter didn’t just disappear.

Where is the antimatter? Why is there such an asymmetry between matter and antimatter, whose particles are produced in pairs? If ever they were to come in contact, they would destroy each other, leaving only pure energy behind. And yet that’s not what ultimately seems to have happened. 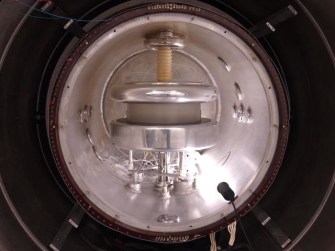 Apparatus for Measuring the Neutron’s EDM.

“We’ve found that the “electric dipole moment” is smaller than previously believed,” he pointed out. “This helps us to rule out theories about why there is matter left over – because the theories governing the two things are linked.”

He also pointed out that their team “set a new international standard for the sensitivity of this experiment.” The asymmetry they were able to pinpoint is extremely tiny but their experiment measured it “in such detail that if the asymmetry could be scaled up to the size of a football, then a football scaled up by the same amount would fill the visible Universe,” he added.

To achieve this precision, the scientists upgraded an apparatus that has held the world’s sensitivity record from 1999 till now. The measurements they achieved were so accurate that they’d compensate even for such factors as a truck driving by their institute, which would disturb the magnetic field enough to affect their experiment.

What can old stars teach us about the birth of our galaxy? …

What can old stars teach us about the birth of our galaxy? …

“This experiment brings together techniques from atomic and low energy nuclear physics, including laser-based optical magnetometry and quantum-spin manipulation,” he shared.

These tools allowed the scientists to probe “questions relevant to high-energy particle physics and the fundamental nature of the symmetries underlying the universe,” said Dr. van der Grinten.

The scientists hope their search will lead to a “new physics” that would expand upon the Standard Model. Previous developments in measuring EDMs, which stared in the 1950s, resulted in such technology as atomic clocks and MRI scanners.

The team included scientists from the UK’s University of Sussex, the Science and Technology Facilities Council’s (STFC) Rutherford Appleton Laboratory in the UK, the Paul Scherrer Institute (PSI) in Switzerland, with 18 organizations involved overall.

Tags
antimatterbig bangcosmosdark matternasaphysicsplanetsspaceuniverse
In this article
antimatterbig bangcosmosdark matternasaphysicsplanetsspaceuniverse
Related
The Well
This is what the fourth dimension looks like
Left–Right, Back–Forth, Up–Down. What’s the fourth dimension?
▸
3 min
—
with
Brian Greene
The physics of entropy and the origin of life
How did complex systems emerge from chaos? Physicist Sean Carroll explains.
▸
6 min
—
with
Sean Carroll
The Universe in 90 minutes: The Multiverse, time, free will, God, & more
Everything you ever wanted to know about the Universe, explained by physicist Sean Carroll.
▸
1:33:47 min
—
with
Sean Carroll
Life
“I went to space and discovered an enormous lie”
What astronaut Ron Garan saw in space changed his life forever – here’s what it taught him.
▸
8 min
—
with
Ron Garan
Videos
The true story behind Carl Sagan’s cult classic, Contact
Do aliens dream about meeting us, too?
▸
with
Jill Tarter
Up Next
The Present
8 courses to help you excel at Microsoft Excel
Land nearly 50 hours of expert Excel training for under $40.