Japanese physicists propose modifications to existing equipment that could allow them to pinpoint axions, hypothetical particles that may be components of dark matter. Dark matter, a mysterious theoretical substance that is thought to make up about 27% of all matter in the universe, is yet to be directly observed.

The scientists hope to track down the elusive axions using experiments with lasers.

The difficulty in finding dark matter is that it is made of, as many physicists think, weakly interacting massive particles or WIMPs, produced in the early Universe. While we haven’t figured out how to spot these particles directly, interacting with regular matter, but we’ve been able to predict their existence by the gravitational effects they have throughout the universe.

The celebrated Large Hadron Collider in Switzerland has been used to search for WIMPs, and now a new approach from Japan hopes to use the KAGRA Observatory to discover dark matter by tracking down axions.

KAGRA stands for the Kamioka Gravitational Wave Detector. This first major gravitational wave observatory in Asia is located deep under a mountain of the Kamioka mine in Japan’s Gifu Prefecture.

The Assistant Professor Yuta Michimura from the Department of Physics at the University of Tokyo, which runs the KAGRA project, explained that because axions are light and don’t interact with normal matter, they are good candidates for dark matter.

Interestingly, he also quantified how much dark matter is there, saying the amount of it inside our planet would weigh as much as a squirrel —

“We don’t know the mass of axions, but we usually think it has a mass less than that of electrons, ” said Michimura. “Our universe is filled with dark matter and it’s estimated there are 500 grams of dark matter within the Earth, about the mass of a squirrel.” 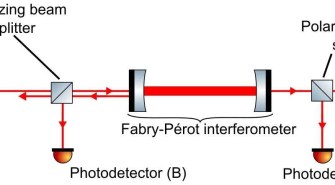 The proposed instrument that would hunt for axion dark matter.

As you can imagine, spotting such particles is no easy task. Physicists have to figure out ways that can make the particles reveal themselves through their signatures.

Koji Nagano, a graduate student at the Institute for Cosmic Ray Research at the University of Tokyo, says that their models show that axions affect light polarization, which describes the geometrical orientation of oscillating electromagnetic waves.

Their method of finding axions relies on this finding.

“This polarization modulation can be enhanced if the light is reflected back and forth many times in an optical cavity composed of two parallel mirrors apart from each other, ” further expounds their approach Nagano.

The best examples of such cavities, says the researcher, are the long tunnels of gravitational-wave observatories.

“There is overwhelming astrophysical and cosmological evidence that dark matter exists, but the question “What is dark matter?” is one of the biggest outstanding problems in modern physics,” said Nagano. “If we can detect axions and say for sure they are dark matter, it would be a truly exciting event indeed. It’s what physicists like us dream for.”

The team proposes plans to inexpensively modify existing observatories like KAGRA or the Laser Interferometer Gravitational-Wave Observatory (LIGO) in the U.S. to search for the axions. The plan, according to Michimura, would be to add “polarization optics in front of photodiode sensors in gravitational-wave detectors.”

The idea’s additional benefit is that it doesn’t require building entirely new facilities. Upgrading gravitational wave labs would not hamper their original missions — looking for gravitational waves. But the new functionality would open a new chapter in the search for dark matter.

Check out the their paper “Axion Dark Matter Search with Interferometric Gravitational Wave Detectors” in the journal Physical Review Letters.

Life finds a way — particularly if it has a moon.
Up Next
Hard Science

Strange magnetic pulses that happen at midnight detected on Mars

A NASA robot on Mars sends back unusual findings, including timed magnetic pulses.