They said to shoot for the moon, and the time to apply has come. On March 2, 2020, NASA began accepting applications for its next class of astronauts for trips to the moon and the International Space Station.

U.S. citizens can apply here until the deadline on March 31, 2020 at 11:59 p.m. EDT. The salary ranges from $104,898 to $161,141 per year, and (for obvious reasons) extensive travel is required. Though the hiring process takes a while, NASA plans to have its final selections for astronaut candidates in mid-2021. The agency hasn’t given word yet on the number of people who will be chosen, but you can bet that the competition will be cutthroat. During the last selection in 2017, the agency only picked 12 out of a total of 18,300 applicants. Of those selected, 11 graduated and became eligible for spaceflight earlier this year. 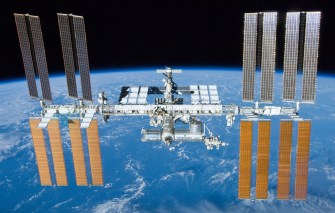 The qualifications are extensive to say the least, and those selected typically exceed the basics. NASA asks that applicants meet at least one of the following education requirements to be considered for the position:

In addition to the minimum educational qualifications, NASA has specialized experience requirements that must be met in order to be considered. This includes having at least 1,000 hours of experience as a pilot-in-command of a high-performance jet aircraft, or having two years of “progressively responsible” work in your specialized STEM field.

Alright, so you have the advanced STEM degree, you’ve mastered command-piloting jet aircraft, and you’ve spent years working in the field of astrophysics. But, are you fit enough? Astronaut candidates will have to undergo a rigorous fitness test, a swimming test, and a medical and psychiatric examination. NASA also typically interviews new recruits about their experience working in treacherous or psychologically taxing environments. For example, SPACE notes that Christina Koch, who recently returned from her year in space, did research for months in Antarctica previous to her career with NASA.

Once selected, the candidates have to undergo grueling training for long-duration missions aboard the International Space Station, which can last 12 months or longer. Basic training requires extensive travel, including long periods of time away in other countries. Because of the arduous astronaut duties, selected candidates will be exposed to physically taxing activities in hazardous environments during their training. This includes being underwater for extended periods of time and being in confined spaces.

It takes around two to three years before the candidates are eligible for missions. Furthermore, International Space Station missions typically require at least 18 months of crew training before liftoff.

“This means this new batch of recruits won’t lift off until after 2024, when the first crewed moon landings of NASA’s Artemis program are scheduled to take place,” reports SPACE.

“Becoming an astronaut is no easy task, because being an astronaut is no easy task,” Steve Koerner, NASA’s director of flight operations and chair of the astronaut selection board at NASA’s Johnson Space Center in Houston, said in a news release. “Those who apply will likely be competing against thousands who have dreamed of, and worked toward, going to space for as long as they can remember. But somewhere among those applicants are our next astronauts, and we look forward to meeting you.”

Think you’ve got what it takes? Visit NASA’s application page here and find out more about applying to become an astronaut.

Humans won’t survive if we stay on Earth. Michio Kaku explains.
▸
7 min
—
with
Michio Kaku
Up Next
Starts With A Bang

Will Alien Life First Be Discovered On Europa, Exoplanets, Or From Extraterrestrials?

There are three possible ways we’ll find alien life. With all of these chances, the only question is which will come first.Given everything humanity has learned about the Universe, it seems […]