Black holes are undoubtedly weird enough to imagine but two recent papers say we don’t understand how they work at all. They go against the previous theories that predicted the center of a black hole to feature a point of infinite density called a singularity. Instead, say the new papers, matter might be sucked into black holes and spat out later in the future somewhere else across the Universe.

The papers were authored by the team of Abhay Ashtekar and Javier Olmedo at Pennsylvania State University and Parampreet Singh at Louisiana State University, who applied the theory of loop quantum gravity to black holes to find that they do not have singularities in the middle.

Loop quantum gravity describes the fabric of spacetime as “a lattice of spin networks, which evolve over time,” explains University of Notre Dame physics professor Don Lincoln, who is also the senior scientist at the Fermi National Accelerator Laboratory. More specifically, loop quantum gravity maintains that “spacetime is quantized, with a smallest possible unit or piece of space and time, beyond which spacetime cannot be subdivided further,” says Lincoln.

The scientists calculated that the strong curving of spacetime near a black hole’s center results in the spacetime actually extending into an area in the future structured like a white hole, which is like a black hole in reverse, spurting matter out rather than pulling it in.

Another way to think about this is that because time near the center of a black hole is very slowed down (due to confronting the strongest gravitational field in the Universe), matter that falls into a black hole doesn’t actually disappear – but gets shot back out around the universe some time later. So if you fast-forwarded way into the future, you’d find this black hole pushing the matter out. 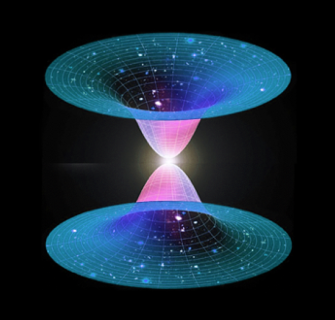 While these ideas are not easily testable, “it is not implausible that empirical observations could support this scenario,” saysCarlo Rovelli from the Center of Theoretical Physics at the Aix-Marseille University and Toulon University in Marseille, France, upon reviewing the new research.

Don Lincoln also points out that one possibility is that the observed phenomenon of “fast radio bursts” could could be explained as a signature of a black hole transforming into a white hole. Similarly telling could be the detection of very high energy cosmic rays in the Earth’s atmosphere.

Reality is more distorted than we think.
▸
with
Big Think
13.8

This short story is a fictional account of two very real people — Anaximander and Anaximenes, two ancient Greeks who tried to make sense of the universe.
Up Next
Health

Always tired? Your immune system may be overactive.

A new study provides strong evidence that chronic fatigue syndrome is linked to abnormal reactions in the immune system.