Stirrings detected from deep below the surface of the Red Planet indicate, for the first time ever, that Mars is geologically active. It’s alive!

A trove of new data is in from the NASA InSight lander‘s stay on Mars revealing new discoveries above and below the planet’s terrain. One of the most fascinating findings is that the planet experiences marsquakes. According to mission lead Bruce Banerdt, a planetary scientist at the Jet Propulsion Laboratory in California, this is the first time scientists have been able to establish that Mars is a moderately seismically active planet, reports Science News. 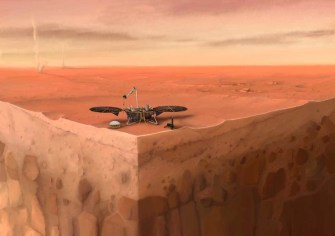 What is the InSight lander?

The InSight (Interior Exploration using Seismic Investigations, Geodesy and Heat Transport) is a spacecraft equipped with sensory technology. It arrived on Mars in November of 2018 for a two-year quest to study the deep interior of the Red Planet. It’s investigating Martian tectonic activity and meteorite impacts seeking to answer one of science’s biggest mysteries: How were the rocky planets in the Milky Way formed?

“This is the first mission focused on taking direct geophysical measurements of any planet besides Earth, and it’s given us our first real understanding of Mars’ interior structure and geological processes,” said geologist Nicholas Schmerr of the University of Maryland. “These data are helping us understand how the planet works, its rate of seismicity, how active it is and where it’s active.”

This week in Nature Geoscience and Nature Communications, mission scientists presented results from the lander’s first 10 months. However, it’s too soon to know what the breaking revelations mean.

“We’re really in the same situation as geophysicists were for Earth in the early 1900s,” Banerdt said in a press briefing last week. “We’re in the wild west of understanding what’s going on.”

The significance of marsquakes

One major discovery made by the InSight is the occurrence of marsquakes. The InSight’s Seismic Experiment for Interior Structure (SEIS) instrument, a seismic prob similar to a stethoscope, detected rumblings beneath the planet’s red surface. As of September, the lander recorded 174 of those (very gentle) quakes. Interestingly, 24 of those were low-frequency rumbles with spectral shapes that follow the same scaling laws as earthquakes according to a paper summarizing the results. This led the team of scientists to infer that they are of tectonic origin. Planetary geologists had previously thought that the planet’s days of tectonic activity were long gone. But this changes things. Moving tectonic plates, by the way, is what produces much of the Earth’s high seismic activity.

What is exciting about this discovery is that the quakes could potentially give seismologists insights into the interior composition of the planet. If the tremors are strong enough they can behave a bit similar to a massive ground-penetrating radar, but using seismic waves rather than electromagnetic waves. As the waves ripple through Mars, they could slow down as they move through or reverberate off certain materials. This would allow scientists to guess what might lie deep under the surface.

Two of the quakes seemed to have originated from Mars’ Cerberus Fossae region where a group of fissures created by faults that split the crust apart can be found. The region’s landscape, which includes landslides, ancient volcanic flows, and dried up water channels, suggests it was tectonically and volcanically active less than 10 million years ago. (Fairly recent in rock-years.)

According to Science News, the quakes keep coming in at mysteriously higher frequencies.

What else did it find?

In addition to evaluating its quake-factor, InSight is measuring Mars’ atmosphere and the surrounding geology of its landing site. We already knew that atmospheric gravity waves (ripples in gases and liquids) sometimes occur on Mars. A new paper on the Martian atmosphere outlines the variety of such waves InSight detected.

“From these measurements, we have discovered Martian infrasound and unexpected similarities between atmospheric turbulence on Earth and Mars,” wrote the researchers. “We suggest that the observations of Mars’s atmosphere by InSight will be key for prediction capabilities and future exploration.”

New findings about the planet’s magnetic field were also discovered. It had been thought that Mars has a weak field, but the results of yet another article suggests this wasn’t always the case. The researchers infer that under the surface of the landing site are magnetized rocks “consistent with a past dynamo with Earth-like strength.” 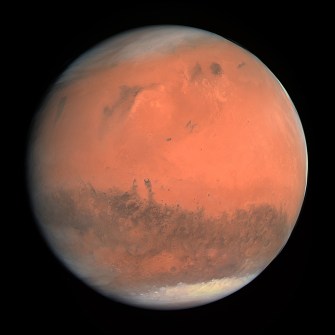 The big story here provided by this slew of new information is that once upon a time, Mars was a radically different kind of planet. These findings could assist potential crewed missions to the planet by letting them know what to expect on Mars, and where to look to uncover more of its mysteries.

The InSight mission is planned to continue for another year, so stay tuned for more potential discoveries coming in from the Red Planet.

What would you do differently if you listened to your true desires?
▸
5 min
—
with
Luke Burgis
The Past

Scientists use tripping rats to show that LSD disrupts communication between two key brain regions.
Up Next
Neuropsych