Or, you know, proof of alien rocks. You be the judge.

Entomologist William Romoser gave a poster presentation on Tuesday, November 19, at the national meeting of the Entomological Society of America in St. Louis, Missouri. He claimed that his analysis of NASA images demonstrates convincing evidence that life exists on Mars, including insect- and reptile-like creatures, some of which still live there today.

“There has been and still is life on Mars,” Romoser said. “There is apparent diversity among the Martian insect-like fauna which display many features similar to Terran insects that are interpreted as advanced groups — for example, the presence of wings, wing flexion, agile gliding/flight, and variously structured leg elements.” 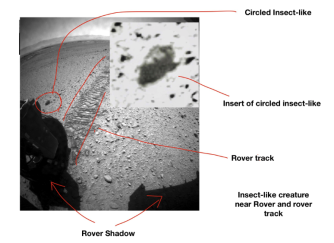 “Once a clear image of a given form was identified and described, it was useful in facilitating recognition of other less clear, but none-the-less valid, images of the same basic form,” Romoser said.

To analyze the photos, Romoser played with factors like saturation, brightness and contrast, but he didn’t add or remove any content from the photos, according to a press release from Ohio University. 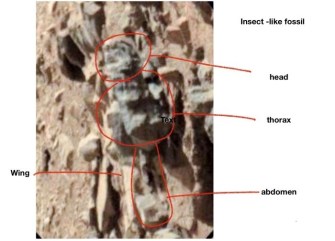 “An exoskeleton and jointed appendages are sufficient to establish identification as an arthropod. Three body regions, a single pair of antennae, and six legs are traditionally sufficient to establish identification as ‘insect’ on Earth. These characteristics should likewise be valid to identify an organism on Mars as insect-like. On these bases, arthropodan, insect-like forms can be seen in the Mars rover photos.” 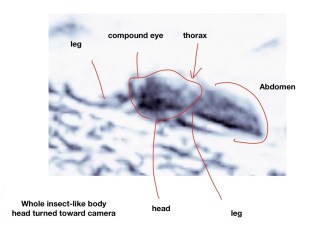 Romoser said some of the creatures he saw in the images resemble carpenter bees and snakes. It’s a bold (and probably false) claim. It’s also not the first time Romoser has reported “evidence” of life on Mars.

In 2017 and 2018, he published two reports describing “unidentified aerial phenomena” on the red planet. As Amanda Kooser wrote for CNET, the more likely phenomenon driving Romoser’s findings is pareidolia, which is our tendency to “see” recognizable shapes in just about anything, from pancakes, to the flames of the Notre Dame fire, to photos from the Mars rovers.

Back on Earth, Romoser has spent 45 years as an entomology professor at Ohio University, where he co-founded the Tropical Disease Institute. He also worked as a researcher for the U.S. Army Medical Research Institute of Infectious Diseases, and has authored and co-authored four editions of the widely-used textbook, “The Science of Entomology.” 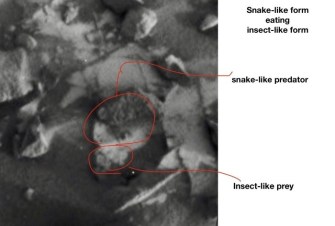 At the very least, Romoser said this week, his findings suggest scientists should keep looking for life on Mars.

“The evidence of life on Mars presented here provides a strong basis for many additional important biological as well as social and political questions,” he added. “It also represents a solid justification for further study.”

Next year, the Mars 2020 rover plans to do just that, only its main focus will be searching for past microbial life.

Solidarity is not dead: How workers can force progressive change