Helium is the second-most common element in the universe, accounting for 23 percent of all normal matter. But despite being extremely common throughout the universe, it is exceedingly rare on Earth. For every million particles of air in our atmosphere, only about 5.2 of those are helium.

Whenever helium balloons are released at a child’s birthday party, that helium escapes into the upper atmosphere. Helium is an exceptionally light element, so it rises to the very top of the atmosphere, where it’s the least dense. One might think that a light gas like helium would be stuck here, pushed up by the denser air beneath it and pushed down by Earth’s gravity. But helium molecules this high up in the atmosphere can be easily exposed to the solar wind — streams of high-energy particles from our sun — which irrevocably blows the helium away into space.

This is the fate of the 6.2 billion cubic feet of helium that we use in a year. Simply put, helium is a finite resource on Earth, and running out of it means giving up a lot more than balloons and squeaky voices.

What’s so special about helium?

Helium has some unique characteristics that make it a critical substance to many researchers and scientists. Most importantly, no other element can get as cold as helium without freezing. In fact, helium doesn’t freeze at all. Once helium is chilled to about 4 Kelvin, it becomes a liquid. The Kelvin scale is an absolute measure of temperature based on the degree of movement in molecules, so 0 Kelvin is as cold as physically possible. For some perspective on how cold 4 Kelvin is, it works out to be –452.47 Fahrenheit — or, –269.15 Celsius.

This matters because of another discovery scientists made: certain materials lose all electrical resistances when sufficiently cooled. These are called superconductors, and they’re used in a wide variety of high-tech devices — particle accelerators, certain nuclear reactors, mass spectrometers, and MRI machines. Without liquid helium, these technologies are not possible, and there is no viable substitute substance. 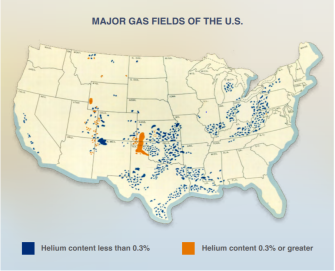 A map of major gas fields in the U.S. showing those that contain an economically viable concentration of helium and those that do not. Image source: American Physical Society, Materials Research Society, American Chemical Society

Where are we getting helium from in the first place?

The helium that we find on Earth is actually the product of radioactive decay. Radioactive minerals made of uranium and thorium emit alpha particles, which are particles composed of two protons and two neutrons. These alpha particles quickly attract electrons, turning into them into helium atoms. In this way, an estimated 3,000 tons of helium are generated per year. This, however, barely makes a dent in our annual consumption. That 6.2 billion cubic feet of helium we consume in year mentioned above converts to about 32,000 tons (assuming the cubic feet are measured at 70°F and under Earth’s normal atmosphere). The vast majority of helium reserves that we rely on to support this habit are the product of millions of years of gradual accumulation.

Not all of the helium generated in the Earth is readily accessible either, and even when it is easy to access, it’s often not economically feasible to collect. After helium is created by radioactive elements deep underground, the gas finds its way to the same deposits as natural gas. As a result, the majority of helium is collected by natural gas companies as an ancillary benefit. Unfortunately, the limits of current technology mean that its only worth gas companies’ time to collect helium if there is a greater than 0.3 percent concentration. Consequently, a fairly significant amount of helium is simply vented away.

If helium is so vital, why is it so cheap?

Back when blimps and other helium-based airships seemed like they would be vital to national defense, the U.S. government collected as much helium as it could. This helium was stored in Amarilla, Texas, in the Federal Helium Reserve (FHR). Today, about 40 percent of the nation’s helium is supplied by the FHR. However, the U.S. government passed laws mandating that the Federal Helium Reserve sell off its reserves and close in 2021, in an effort to recoup debts the reserve had incurred and to privatize the market.

As a result, helium prices have remained fairly low — low enough that we don’t feel too bad about letting this precious stuff go to waste in balloons for birthday parties.

Despite this, however, helium isn’t actually all that cheap, especially not for researchers who rely on it to conduct experiments. According to a 2016 report, helium prices increased by 250 percent in the five years prior. In fact, some researchers have had to spend more than a quarter of their grant funds on purchasing liquid helium.

A helium shortage won’t just hurt researchers; the lack of helium for use in high-tech applications will make life more difficult for everybody. In an interview with USA Today, Northwestern physics professor William Halperin said, “The shortage of helium which is present now — and which we can anticipate will increase — will affect, broadly, everybody.”

Ancient organic chemistry.
Up Next
Health

The U.S. law regulating the cosmetics industry was passed in 1938, and it hasn’t been significantly updated since.