If you are a male fish who doesn’t understand why your reproductive impulse has dimmed and you haven’t yet read Jonathan Swift’s Modest Proposal, what, with the mysteries of human communication to conquer and all, then science wants to let you know: you might want to consider eating your kids.

The typical hypothesis regarding animals eating their young usually stems from the observation that parents will sometimes lack so much access to food that eating their offspring becomes a realistic option, but Y. Matsumoto of Nagasaki University and his colleagues recently published a study in Current Biology that notes that the barred-chin blenny fish find cannibalism an “endocrinological necessity to restart courtship behavior for subsequent mating.” In other words: if they wanted to take a shortcut to reactivating their reproductive cycle, this was the path they took. They eat the eggs in the name of future courting and guarding. 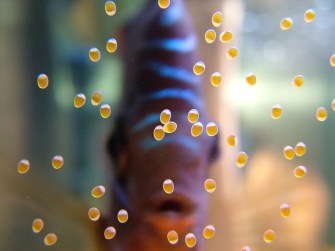 But, why? Why does the male blenny not simply wait out the birth of the offspring before returning to reproduction? If we’re to use a study looking a little bit more broadly at cannibalism in fish as a point of reference, there’s more than one answer here — sometimes the answer depends on when a batch of eggs are laid; sometimes it depends on the availability of mates; sometimes it’s because the eggs that are being raised aren’t their own; sometimes it depends on whether or not an egg predator is nearby — but one answer appears to be something of a zero sum game: if it doesn’t look like the brood is going to be a ‘productive’ brood — if it’s a small batch of eggs and the process of raising these kids will leave them at something of a competitive disadvantage (i.e., they’re putting too much energy into raising small, weak fish) — then the eggs are eaten and the parents begin again, as eating the kids “acts to rapidly modulate androgen levels and therefore courtship.”

“Selection plainly favors females that lay large clutches,” Gil G. Rosenthal writes in a summary of the study. “Selection also should favor females that can anticipate the probability of clutch destruction.”

So if you’re a male worried about your testosterone dropping over time, maybe you should pay a visit to The Island Of Dr. Moreau and have a go at trying to turn yourself into a fish. If you accomplish that goal, then you know you have a path in front of you to help ensure that certain things stay competitive.

Is this video four minutes long? Not necessarily.
▸
4 min
—
with
Jim Al-Khalili
Up Next
Neuropsych

Are people with more self-discipline happier?

Why self-control makes your life better, and how to get more of it.