It may seem like octopuses and humans have nothing in common.

After all, octopuses separated from humans on the evolutionary family tree nearly 500 million years ago, and with their eight arms, three hearts and sharp beaks, they bare little resemblance to primates. The venomous cephalopods possess extraordinarily large brains whose neurons, unlike humans, are distributed mostly throughout their arms, composing a uniquely complex nervous system. Octopuses also wield strange, alien-like abilities: They can taste what they touch, paralyze prey with saliva, change their skin color to use camouflage, and blind enemies with jets of ink.

But one thing octopuses and humans have in common is intelligence.

Thought to be among the planet’s first intelligent creatures, octopuses have been observed to play, navigate mazes and even collect coconut shells to build shelter, an example of tool use. They also display an uncanny ability to escape from human captivity. In 2016, a young octopus at New Zealand’s National Aquarium was able to squeeze himself through a tiny gap at the top of his tank, flop to the floor, slither down a long drainpipe, and plop into the ocean, never to be seen by aquarium staff again. 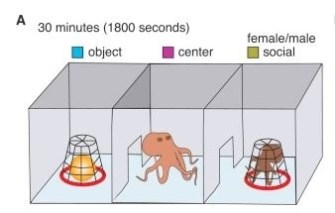 The three-zone tank used in the experiment. Cage with toy on left, cage with octopus on right.

Despite this cognitive sophistication, many scientists have long thought octopuses and other invertebrates lack the neural requirements needed to experience emotion or practice social behaviors in the ways mammals do.

However, a new study published in the journal Current Biology challenges that long-held presumption by showing that administering MDMA to octopuses seems to elicit social behavior in them, suggesting that the architecture for experiencing such phenomena extends farther back in evolutionary history than previously thought.

For the study, the researchers devised an experiment in which they placed a California two-spot octopus in a tank containing three rooms separated by two walls with slots. The middle room was empty, but the two rooms on either side contained either a “novel toy object” (a stormtrooper figurine) in a cage or another octopus in a cage, and the non-caged octopus was free to spend time in whichever room it liked.

All five of the octopuses that completed this part of the experiment spent far more time in the room with the toy, though both male and female octopuses did tentatively explore the other room when a female was in the cage.

The researchers then conducted this experiment again, but this time, each octopus was bathed in water containing MDMA before entering the three-zone tank. Unlike before, the octopuses on MDMA seemed far more interested in the room with the octopus, at times touching it in an exploratory manner, instead of the room with the lifeless toy. 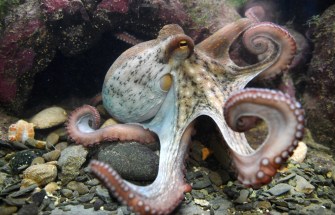 Although they are about as alien from human life as it gets, Dölen’s study shows that octopuses share some important characteristics with humans.

Gül Dölen, Ph.D., an assistant professor of neuroscience at Johns Hopkins University and co-author of the study, told Inverseit was like watching an “eight-armed hug.”

“They were very loose,” Dölen said. “They just embraced with multiple arms.”

It’s impossible to know what the octopuses were experiencing, but Dölen offered her own personal observation (as anecdotal evidence, not scientific) to Inverse: the octopuses acted like humans do when they’re on ecstasy.

On high doses, the octopuses breathed intensely and turned white. But on lower doses, the octopuses seemed to display more typical behavior of someone on a psychedelic: one became very interested in minor sounds and scents, another spent some time doing flips in the tank, and one octopus “looked like it was doing water ballet,” swimming around with its arms extended.

In humans, MDMA acts on the brain mainly by stimulating activity of the neurotransmitter serotonin. The California two-spot octopus also possesses a serotonin transporter to which MDMA can bind. However, the researchers weren’t sure whether this ancient feature was active in the octopuses.

“We needed to check the genome to make sure that the genes that encode the serotonin transporter, which is the protein that MDMA binds to, was still a binding site in octopuses even despite the fact that so much evolutionary time had passed,” Dölen told Inverse.

“We performed phylogenetic tree mapping and found that, even though their whole serotonin transporter gene is only 50 to 60% similar to humans, the gene was still conserved. That told us that MDMA would have a place to go in the octopus brain and suggested it could encode sociality as it does in a human brain.”

The idea that octopus behavior might be regulated by serotonin, which largely controls human emotion, is especially interesting because of how different the creatures are from humans.

“This was such an incredible paper, with a completely unexpected and almost unbelievable outcome,” said Judit Pungor, a postdoctoral researcher at the University of Oregon not involved in the study, in an interview with Gizmodo. “To think that an animal whose brain evolved completely independently from our own reacts behaviorally in the same way that we do to a drug is absolutely amazing.”

To be sure, it’s not exactly clear why the octopuses “opened up” while they were on MDMA. In addition to the study being limited by sample size, it’s possible that the octopuses were more inclined to touch the other octopus because the drug made them more interested in touching in general, not necessarily social touching.

Still, Dölen said that the findings suggest that molecular and cellular genetic information, rather than anatomical data, are more important in deciding whether animals develop social behavior.

“Octopuses don’t have the same parts of the brain that we think are important for social behavior, a region called the nucleus accumbens,” Dölen told Inverse. “What we’re arguing is that the brain regions don’t matter. What matters is that they have the molecules, the neurotransmitters, and some configuration of neurons. They have the serotonin transporter and that’s enough.”

Why psychedelics change your reality

Psychedelic medicines are surging in popularity. Here’s how they work.
▸
6 min
—
with
Matthew W. Johnson
The Well

A powerful tool for learning: Why drawing isn’t just an art

It’s much more than an art form.