One of the most effective things Americans can do to curb greenhouse gas emissions is surprisingly simple: eat beans instead of beef.

A recent study showed that if every American made the switch, the U.S. could achieve between 46 and 74 percent of the reductions necessary to meet its emissions goals for 2020 that were pledged by former President Barack Obama. That considered, imagine the difference a reducetarian approach could have too, for those who can’t go cold turkey—er, beefy—on their steaks.

“I think there’s genuinely a lack of awareness about how much impact this sort of change can have,” said study author Helen Harwatt to The Atlantic.

The massive scale of livestock farming puts the problem into focus. According to the United Nations, one third of Earth’s arable land is used to grow feed for livestock, and in total, about a third of all land on the planet is used to produce animal products. 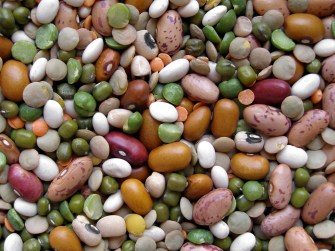 Feeding cows is also an especially inefficient process. During their lifetimes, cows will consume far more calories from food like beans than they’ll ever yield in meat. Growing that food takes up a lot of land. The study notes that the U.S. could free up 42 percent of its cropland if Americans gave up beef — that’s more than the size of California.

Making the dietary switch would be an effective way for individuals to fight climate change without having to rely on lawmakers or private interests.

“The real beauty of this kind of thing is that climate impact doesn’t have to be policy-driven,” said Harwatt. “It can just be a positive, empowering thing for consumers to see that they can make a significant impact by doing something as simple as eating beans instead of beef.”

Obama pledged that U.S. greenhouse gas emissions would be roughly 17 percent lower in 2020 than they were in 2005. Making this dietary shift could be one of the easiest ways to reach that goal.

“Given the scale of greenhouse gas reductions needed to avoid the worst impacts of climate change, are we prepared to eat beef analogs that look and taste like beef, but have a much lower climate impact?” Harwatt asks. “It looks like we’ll need to do this. The scale of the reductions in greenhouse gas emissions needed doesn’t allow us the luxury of ‘business as usual’ eating patterns.”

A new study mapped areas of the U.S. that are most likely to suffer natural disasters.
Up Next
Mind & Brain

A number of studies presented at the 125th Annual Convention of the American Psychological Association verify yoga’s role in curbing depression.