Under high greenhouse gas emissions, current estimates put sea level rise at little more than 8 feet by 2100. Even if all the Antarctic ice sheets melted, sea levels would only rise 60 feet.

Of course, even modest sea level rises are projected to displace hundreds of millions of coastal people, increase the risk of devastating storm surges, and destroy ecosystems and agriculture hubs through saltwater intrusion. Not to mention other climate change concerns like ocean acidification and deoxygenation. Maybe a life of trimarans and pyrotechnic water battles won’t be so bad.

But if Hollywood wants to make good on its post-apocalyptic title, it can. It just needs to set the inevitable remake 3.2 billion years in the past. 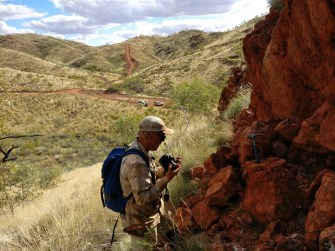 According to research published this month in Nature Geoscience, Earth may have once been engulfed by a global ocean. With few to no landmasses present, this period in our planet’s history may have serious implications for how life emerged.

Coauthors Boswell Wing, associate professor in the Department of Geological Science at the University of Colorado Boulder, and Benjamin Johnson, assistant professor of geology and atmospheric sciences at Iowa State University, began their research wanting to take the Earth’s ancient temperature.

To do so, they traveled to the Panorama district in Northwestern Australia. This geological site houses an Archaean-eon chunk of ocean crust where chemical sediments are preserved in ancient hydrothermal vents that once filtered a young ocean’s water.

“There are no samples of really ancient ocean water lying around, but we do have rocks that interacted with that seawater and remembered that interaction,” Johnson said in a release. The researchers took more than 100 rock samples to examine — a process Johnson likens to “analyzing coffee grounds to gather information about the water that poured through it.”

Using their samples and a library of existing data, Wing and Johnson created a cross-section grid of oxygen isotopes and temperature values.

Isotopes are variants of a chemical element. They sport the same number of protons as the vanilla form of their element, but a different number of neutrons. They can also be preserved in ancient rock where geologists can measure them. By comparing occurrences of “heavy” and “light” isotopes, geologists can reveal the general environmental conditions that led to such a ratio. 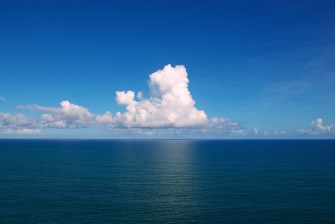 Theres…not much to see on water world.

Johnson and Wing’s data showed that the Oxygen-18 isotope was more abundant in the Archaean ocean than in today’s relatively ice-free oceans (roughly 4 percent more).

While a small difference, the larger presence of these “heavy” isotopes has important implications due to their sensitivity to landmasses. Continents slurp up Oxygen-18 as water filters through their clay-rich soils, thus removing these isotopes from the oceans.

The researchers theorized that Oxygen-18’s larger presence may have resulted from a simple lack of continents. While Earth may have sported a few landmasses, they would have been small, few, and far between. As larger landmasses emerged, weather and other water-rock interactions would have drawn down Oxygen-18 levels to present conditions.

“There’s nothing in what we’ve done that says you can’t have teeny, micro-continents sticking out of the oceans,” Wing said. “We just don’t think that there was global-scale formation of continental soils like we have today.”

It has long been debated whether life began in the ocean or freshwater ecosystems on land. The earliest known life forms were microbes, and clues in the fossil evidence date their arrival to at least 3.7 billion years ago. But since life can only evolve in the presence of its particular environment, a lack of land would render the debate over.

“Without continents and land above sea level, the only place for the very first ecosystems to evolve would have been in the ocean,” Johnson said.

Land ho! But when?

But Wing and Johnson’s theory is just that: a theory. They admit another possibility is that warmer waters interacted in such a way to enrich the oceans with Oxygen-18 isotopes.

To test their hypothesis further, the two researchers plan to collect samples from younger rock formations at other sites. Their goal is to try to determine when large landmasses first breached the ocean blue.

Elsewhere, others are also trying to fill in Earth’s baby book. After measuring iron isotopes, researchers from the University of Copenhagen recently proposed that proto-Earth may have formed in as few as five million years. Another study, published in the Journal of Geophysical Research, theorizes that the hydrogen needed to create Earth’s damp dunnage may have originated in our cradle nebula.

“Trying to fill that gap is really important,” Johnson said.

The spray uses snippets of DNA to gum up virus replication.
Health

At long last, we might have an HIV vaccine

HIV mutates rapidly, which has made the development of a vaccine an enormous challenge for decades. Finally, we might have one.
Up Next
Starts With A Bang

Why String Theory Is Both A Dream And A Nightmare

The string landscape might be a fascinating idea that’s full of theoretical potential, but it cannot explain why the value of such a finely-tuned parameter like the cosmological constant, the […]