You may not have known this, but The Walt Disney Company does much more than animated films and amusement parks. Its Disney Research arm, with divisions all over the world, has the mission to deliver all kinds of scientific and technological innovations. From video processing and robotics to behavioral sciences and materials research, Disney has it covered. Now, its researchers have brought us what we’ve all been waiting for (even without knowing it)—ubiquitous wireless power transfer or, in other words, electricity with no wires.

So, what is it going to take to have your phone charged without a power outlet and a charger? In layman’s terms, an apartment especially built for that purpose with a huge copper pole propped in the middle. In non-layman’s terms, the process is called quasistatic cavity resonance (QSCR). It can enable specially designed spaces, like cabinets, rooms or warehouses, to generate quasistatic magnetic fields that can safely power devices located within the space. 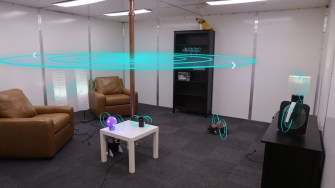 The researchers constructed a room, with walls, ceiling and floor built of aluminum panels, and in the middle of it they placed a copper pipe. In the center of the pipe they inserted discrete capacitors, which set the electromagnetic frequency of the structure and confine the electric fields. The currents go through the copper pipe and all sides of the room, generating a magnetic field that circulates around the pole. All devices placed within this magnetic field are instantly powered. Everyday objects such as chairs and tables, don’t interact with the field, and therefore don’t obstruct it.

Disney’s researchers say they can scale the invention up and down, from a box to a warehouse. Their simulations show that they can transmit 1.9 kilowatts of power while meeting federal safety guidelines, meaning that the environment is completely safe for humans. In addition, the scientists believe that in the future, the requirement of metalized walls can be reduced significantly and even old rooms could be retrofitted with modular panels or conductive paint.

It started with a 22-year-old woman, named in papers only as Mrs McK.
Hard Science

Hybrid working, robot fast food workers, and the rapid acceleration of NFTs are just the beginning.
Up Next
Surprising Science

Could This Transhumanist Be the next Governor of California?

Libertarian transhumanist Zoltan Istvan is running for Governor of California in 2018 and, among other things, he wants to conquer aging and death for all!