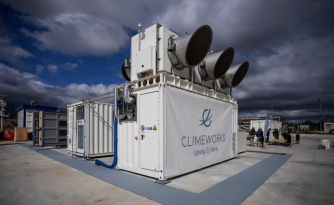 One of the ClimeWorks fans in question.

With the U.N. releasing a report on climate change that demands sustained attention, it’s worth noting that ClimeWorks — a company based in Switzerland — opened its third ‘carbon capture’ site on October 2nd in Troia, Italy.

The ClimeWorks carbon capture center in Italy only takes the equivalent of 32 cars off the road per year. That’s more than zero, but it’s nowhere near where the numbers should be. At best, as David Roberts pointed out over at Vox this past July, some of the capture sites in the world are — at best — carbon neutral, and the goal should be to produce something that is ‘carbon negative,’ i.e., something that takes more carbon out of the air, not just something that puts nothing into the air.

Of the three carbon capture sites ClimeWorks has in the world, the one in Iceland is the only capture site that’s carbon negative.

That doesn’t mean that there aren’t promising steps being taken with the carbon neutral sites: as Akshat Rathi notes in Quartz, where the story was first reported, the carbon dioxide first captured at ClimeWorks’s first carbon capture site was “fed to a greenhouse, which boosted the growth of the plants inside it.” The gas captured and converted at the plant in Italy will be used to provide fuel for trucks. These two examples illustrate one of many different ways in which Climeworks could theoretically pursue the big picture with creativity. 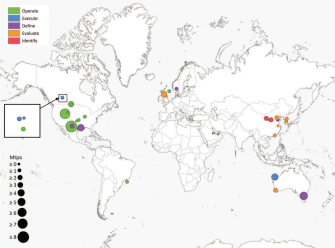 Map of currently active Carbon Capture sites across the world.

There are other considerations worth bringing into the framing of this as well, many of which can be found in a lengthy paper from the University of Sheffield.

Tags
climate changeenvironmentsciencetechnology
In this article
climate changeenvironmentsciencetechnology
Related
Life
Strange life forms create an “alien” ecosystem in an abandoned uranium mine
Slimy biofilms made up of bacterial and eukaryotic life forms have taken over an abandoned, flooded uranium mine in Germany.
The Present
Climate change is altering the chemistry of wine
Smoke taint from wildfires is gross, even to wine amateurs.
Life
Our antidepressant drugs are affecting animals and ecosystems
A toxicologist explains the impacts of antidepressants on fish — and no, they’re not getting any happier.
Hard Science
200 years of exploring Antarctica
What we’ve learning from the world’s coldest, most forbidding, and most peaceful continent.
Life
Most of the seafloor is a thick graveyard of ooze
Each year, several trillion pounds of microscopic silicon-based skeletons fall down the water column to pile up into siliceous ooze.
Up Next
Health
Why modern men are losing their testosterone
Research has shown that men today have less testosterone than they used to. What’s happening?