Mysterious paintings on cave walls and ceilings from long ago no doubt offer insights into the lives of the people who made them. However, exactly what they tell us is less clear. While hunting scenes and images of communities seem straightforward, there are also more abstract images, such as the 5-armed pinwheels painted on the ceiling of Pinwheel Cave in the Wind Wolves Preserve of California’s San Emigdio Mountains. Now, chewed clumps of jimsonweed have been found wedged into small crevasses in the ceilings. Datura wrightii, also called “Devil’s Trumpet,” is a hallucinogenic.

The findings are presented in a study published in PNAS. 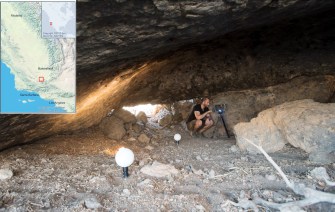 About 50 clumps, or “quids,” of chewed Datura plant fibers were found tucked into the stone alongside the swirls. It’s believed they were painted sometime between 1530 and 1890 by members of the Chumash tribe, linked to today’s Tejon people. This is the first time traces of hallucinogens have been found in proximity to cave art. It strongly suggests a connection.

The discovery was made by archaeologist David Robinson of the University of Central Lancashire (UCLan) in the U.K. Robinson has been excavating the cave since 2007.

As for what those red-ochre pinwheels represent, Robinson asserts that they depict Datura itself and the way that it unwinds at dusk as seen at the top of this article. 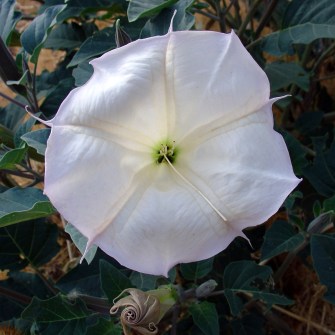 Chemical analysis revealed that 15 quid samples contained traces of two hallucinogenic alkaloids found in Datura, scopolamine and atropine. Microscopy revealed that a majority of the quids contained remnants of Datura, and further 3D scrutiny found that the quids exhibited properties consistent with having been chewed.

Says co-author Matthew Baker of the University of Strathclyde, “The combination of chemistry and archaeology in this project has truly shown the power of a multidisciplinary approach to uncover new knowledge.”

The Chumash people are known to have used Datura in adolescent rites of passage and for shamanic vision quests. The plant was considered part of the tribe’s spiritual family, personified as an old woman named “Momoy.” The plant is classified today as an entheogen, which are plants used for spiritual purposes.

Datura was often ingested after being processed into liquid form, it was also chewed, as seen in the cave’s quids. The Chumash knew how much Datura to ingest — it can be lethal when the dosage is too high.

“The link between hallucinogens and rock art has long been suspected,” says Robinson, “and this research shows that it was not only a source of creative inspiration for these prehistoric groups of people, but a core tenet of important rituals and community gathering.”

He adds, “These findings give us a far more in-depth understanding of the lives of indigenous American communities and their relationships, from late prehistoric times right up until the late 1800s. Importantly, because of this research, the Tejon Indian tribe now visits the site annually to reconnect to this important ancestral place.”

Co-author Fraser Sturt of the University of Southampton, lauds the partnerships that made the findings possible:

“The results of this project spring from a high interdisciplinary, open and collaborative approach to research. In this way, new and improved recording and analytical techniques have helped to reconnect material remains, art, narrative and people across space and time. Thus, while the focus is on the hallucinogenic properties of Datura and its role in rock art and community generation, this work also shows that it is one facet of a complex suite of relationships between people, place and the environment.”

Many key inventions were unique: one-offs.
13.8

The James Webb Space Telescope finally could answer the age-old question of whether we are alone in the universe.
Neuropsych

A professor of educational psychology explains what and what not to do.
High Culture

Undiagnosed brain disease or divine inspiration? The origins of the French composer’s most provocative composition remain up for debate.
Up Next
Starts With A Bang

Ask Ethan: Can We Find Out If Gravitons Exist?

The General Relativity picture of curved spacetime, where matter and energy determine how these systems evolve over time, has made successful predictions that no other theory can match, including for […]