What’s it like on the outer edges of a black hole?

This mysterious area, known as the event horizon, is commonly thought of as a point of no return, past which nothing can escape. According to Einstein’s theory of general relativity, black holes have smooth, neatly defined event horizons. On the outer side, physical information might be able to escape the black hole’s gravitational pull, but once it crosses the event horizon, it’s consumed.

“This was scientists’ understanding for a long time,” Niayesh Afshordi, a physics and astronomy professor at the University of Waterloo, toldDaily Galaxy. The American theoretical physicist John Wheeler summed it up by saying: “Black holes have no hair.” But then, as Afshordi noted, Stephen Hawking “used quantum mechanics to predict that quantum particles will slowly leak out of black holes, which we now call Hawking radiation.” 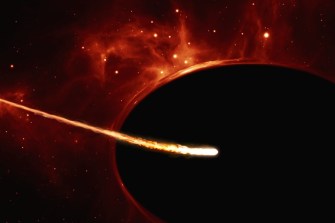 “If the quantum fuzz responsible for Hawking radiation does exist around black holes, gravitational waves could bounce off of it, which would create smaller gravitational wave signals following the main gravitational collision event, similar to repeating echoes,” Afshordi said. 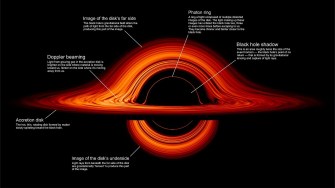 A new study from Afshordi and co-author Jahed Abedi could provide evidence of these signals, called gravitational wave “echoes.” Their analysis examined data collected by the LIGO and Virgo gravitational wave detectors, which in 2015 detected the first direct observation of gravitational waves from the collision of two distant neutron stars. The results, at least according to the researchers’ interpretation, showed relatively small “echo” waves following the initial collision event.

“The time delay we expect (and observe) for our echoes … can only be explained if some quantum structure sits just outside their event horizons,” Afshordi told Live Science.

Scientists have long studied black holes in an effort to better understand fundamental physical laws of the universe, especially since the introduction of Hawking radiation. The idea highlighted the extent to which general relativity and quantum mechanics conflict with each other.

Everywhere — even in a vacuum, like an event horizon — pairs of so-called “virtual particles” briefly pop in and out of existence. One particle in the pair has positive mass, the other negative. Hawking imagined a scenario in which a pair of particles emerged near the event horizon, and the positive particle had just enough energy to escape the black hole, while the negative one fell in.

Over time, this process would lead black holes to evaporate and vanish, given that the particle absorbed had a negative mass. It would also lead to some interesting paradoxes.

The exact nature of black holes remains a mystery. If confirmed, the recent discovery could help scientists better fuse these two models of the universe. Still, some researchers are skeptical of the recent findings.

“It is not the first claim of this nature coming from this group,” Maximiliano Isi, an astrophysicist at MIT, told Live Science. “Unfortunately, other groups have been unable to reproduce their results, and not for lack of trying.”

“Our results are still tentative because there is a very small chance that what we see is due to random noise in the detectors, but this chance becomes less likely as we find more examples. Now that scientists know what we’re looking for, we can look for more examples, and have a much more robust confirmation of these signals. Such a confirmation would be the first direct probe of the quantum structure of space-time.”

Eugenics is bad – but understanding DNA is good.
▸
4 min
—
with
Kathryn Paige Harden
Up Next
Smart Skills