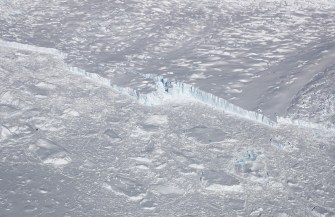 The area of the iceberg poised to calve off the Pine Island Glacier is about 115 square miles, or 300 square kilometers.

The Pine Island Glacier (a.k.a. PIG)

About one year ago, in Antarctica, the Pine Island Glacier calved an iceberg about 100 sq. miles in size—4.5x the size of Manhattan.

“As the planet warms from 1.5°C to 2°C, the risks grow rapidly for some very dangerous tipping points, including the irreversible collapse of the West Antarctic ice sheet (which would raise sea levels 20 feet),” reads the UN’s recent IPCC Report.

It’s doubly (trebly?!) worrisome on the heels of the above UN IPCC report, which basically tells us we’re screwed unless we take drastic action—and, I mean drastic—in order to curb emissions and slow the inexorable drift into an Earth that looks like one of those terrifying science fiction novels.

That’s the 2017 calving, in a GIF created by Stef Lhermitte.

If the West Antarctic ice sheet collapses, it will mean a 20-foot rise in sea levels. And it will release twice as much carbon into the atmosphere as exists today.

The fact that the United States has gone the opposite direction, abandoning the Paris Accord and even calculating a rise of 7 degrees (F) as acceptable and even inevitable when working on new automobile emission standards is contributing to a looming climate change catastrophe by 2040.

Deliveries of the $250k Lightyear 0 will start in November 2022.
Up Next
Hard Science

New study shows how depression rises with the temperature

New research published in Proceedings of the National Academy of Sciences used survey data from 2 million Americans to examine the links between climate change and mental health issues.