Alex Filippenko is the Richard & Rhoda Goldman Distinguished Professor in the Physical Sciences. His accomplishments, documented in more than 800 research papers, have been recognized by several major prizes,[…]
Go to Profile 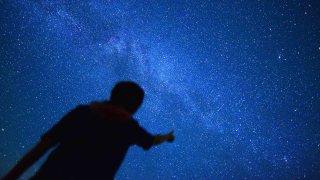 What Has Astrophysics Done For You Lately?

What happens up there directly affects life down here. From star-gazing to quantum mechanics, astronomy is one of humanity's great thruster engines of innovation.
▸
5 min
—
with
Alex Filippenko

Alex Filippenko is a

and recipient of the prestigious Hertz Foundation Grant for graduate study in the applications of the physical, biological and engineering sciences. Where does UC Berkeley Professor Filippenko begin to explain the importance of astronomy? In this video he explores how it captures the attention of children, who then grow up to become scientists across all disciplines; and the more abstract, impractical research that eventually leads to spinoff technology that radically changes our lives. With the support of the Fannie and John Hertz Foundation, Filippenko pursued a PhD in astronomy at the California Institute of Technology.

The Hertz Foundation mission is to provide unique financial and fellowship support to the nation’s most remarkable PhD students in the hard sciences. Hertz Fellowships are among the most prestigious in the world, and the foundation has invested over $200 million in Hertz Fellows since 1963 (present value) and supported over 1,100 brilliant and creative young scientists, who have gone on to become Nobel laureates, high-ranking military personnel, astronauts, inventors, Silicon Valley leaders, and tenured university professors. For more information, visit hertzfoundation.org.

Alex Filippenko: One can wonder why does astronomy, or any sort of abstract pure research for that matter, make any difference to us – to the typical person in the world?  Well first of all thinking about the universe and figuring out how things work is something that of all animals only humans can do, only we have the intellect, the curiosity, the opposable thumb with which to build machines to explore nature.  So some of us should do it.  Second of all these kinds of discoveries, discoveries about the cosmos excite kids.  I like to say that astronomy is the gateway science.  It gets kids interested in science and technology because they hear about all these amazing discoveries.  I myself as a kid was thrilled by the lunar landings of the Apollo mission. Now most kids won't go on into astrophysics, but what they'll do is they'll study science and technology and they'll go into fields that are more immediately useful to society, such as applied physics and engineering and computer science and medical physics. But the bug that bites them is often astronomy.

And finally you never know what practical spinoffs there might be and let me give you a few examples.  A century ago when quantum physicists such as Einstein and Bohr and Heisenberg and Schrodinger were developing quantum physics they had not the slightest practical application in mind.  They didn't want to make a better toaster or a better bicycle or whatever. They wanted to understand the nature of light and why atoms exist, why atoms are stable, and other such questions of that sort that seem incredibly far removed from our everyday lives. Well fast forward a century, you could not imagine today's high-tech world without an understanding of the microphysics, the quantum world.  Look at the silicon revolution for example. Look at lasers. Look at nearly everything it all stems from quantum physics.  Who would've thought that a century ago?

Another even perhaps more abstract idea is Einstein's general theory of relativity, the theory that the presence of mass or energy curves or warps the shape of space and of time around it.  So, for example, our sun forms a dimple in space and earth moves along its natural path through that dimple.  So too earth forms a dimple and the moon moves along its natural path through that warped space.  That's what gravity is.  Newton had a formula for gravitational attraction but he didn't know what it was and Einstein came up with a theory.  Well you might say who cares as long as gravity works what do we care what the exact mechanism is?  Well, it turns out that Einstein's theory makes predictions that are in subtle ways different from Newton's predictions.  And for things like the global positioning system, GPS, you have to take the effects of general relativity into account.  The clocks in the satellites up in space, these satellites communicate with your device in your car, they run at a slightly faster speed than the clocks here on earth.  And if that difference in the rate of passage of time had not been taken into account by the physicist and engineers who designed and built the GPS system, GPS wouldn't work.  So here's something of incredible military and commercial value that simply would not work if we didn't understand gravity in a fundamental way according to Einstein, this idea of curved space time.

So again, who would've thought that a century ago when Einstein was developing the general theory of relativity that it would have this incredible practical application?  Sure we might never get close to a black hole, which is an extreme prediction of general relativity, but it doesn't matter.  The theory was developed, it's beautiful, it excites kids and it even has practical applications.  So with much of astronomy we don't know what the spinoffs will be, but we do know that as humans we can accomplish these goals and we can also excite kids into pursuing areas of science and technology. And that in my opinion is really good.

Industrial Revolution 2.0: First We Electrified, Then We Cognified