Beloved author and astronomer Dr. Carl Sagan hosted a 13-part PBS mini-series in 1980 called Cosmos, that today many in science, the media, and regular science-minded citizens remember fondly. Sagan, often sporting a turtle neck or a corduroy jacket, amazed viewers by unraveling some of the biggest mysteries of the solar system, how stars work, the search for intelligent life beyond our planet, and other expansive topics, in ways both spellbinding and accessible.

Sagan today still holds an illustrious cult status the world over and has been an inspiration to such people as Neil deGrasse Tyson, Family Guy’s Seth McFarlane, and British physicists Brian Cox and Maggie Aderin-Pocock. Science journalists in particular hold the show in high reverence, even referring to Sagan’s monologues as “poetry.” As such, a website called Twitch is allowing you to consume the entire mini-series for free in marathon form on its website. To celebrate such a tremendous event, here are seven things you need to know about Carl Sagan’s Cosmos. 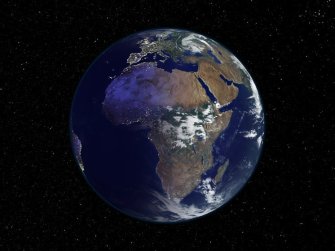 1. Several episodes show a famous photo of Earth with Africa in the upper left. That’s the “Blue Marble” photo Apollo 7 astronauts snapped off in 1972. They shot it while traveling toward the moon. For nearly three decades, it stood as one of the only sunlit pictures of our planet. 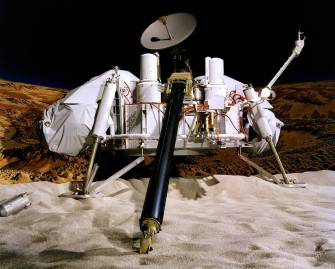 2. Though mostly known for his work on Cosmos, Dr. Sagan had lots of scientific chops of his own. He worked on several NASA missions including the Viking missions, which explored Mars. He was even a strong supporter of the SETI institute, a global initiative on the forefront of the search for intelligent life elsewhere in the universe. 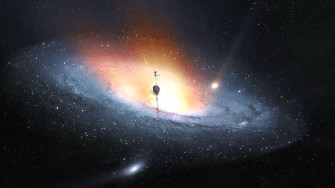 3. In the ‘Cosmic Calendar’ episode, the entirety of the world’s existence is outlined using calendar dates. The Big Bang occurs on January 1, life on Earth arrives on September 25, trees and reptiles come on the scene on December 23, and finally in the last few minutes, humans pop up. The written record only comes along in the last 10 seconds of the calendar. Talk about putting our species and place in the universe into perspective. 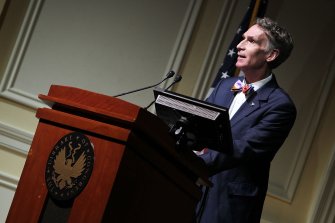 4. The series is known for some great quotes including:

“Up there in the immensity of the cosmos, an inescapable perception awaits us. National boundaries are not evident when we view the Earth from space. Fanatical ethnic, religious, or national chauvinisms are a little difficult to maintain when we see our planet as a fragile blue crescent fading to become an inconspicuous point of light against the bastion and citadel of the stars.”

The golden record and its cover for the Voyager I mission. Credit: NASA/Caltech.

5. Sagan oversaw the creation of the famous gold records which adorned the Voyager I and II missions. These are currently hurtling through space, complete with welcome messages in many languages, different musical compositions, and even whale song. They were created in case one of the Voyagers bump into intelligent, spacefaring life. 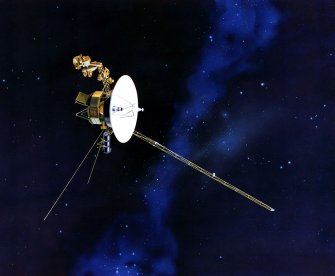 6. The filming of the series took a year. It had some of the most impressive special effects for any documentary series before or since. The production team traveled to many different locations in countries such as Egypt, Mexico, India, Cambodia, Italy, and France. Many of the studio segments were shot at Renssalear Polytechnic Institute (RPI) in Troy, New York. There, the students made several of the items used in the show, including a model of a Mars rover. 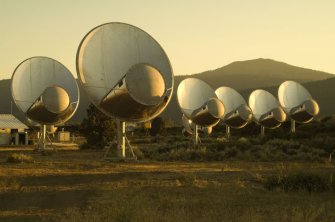 7. Another of Sagan’s incredible quotes:

There are some hundred billion galaxies, each with, on the average, a hundred billion stars, 1011 x 1011 = 1022, ten billion trillion. In the face of such overpowering numbers, what is the likelihood that only one ordinary star, the Sun, is accompanied by an inhabited planet? Why should we, tucked away in some forgotten corner of the Cosmos, be so fortunate? To me, it seems far more likely that the universe is brimming over with life. But we humans do not yet know. We are just beginning our explorations. From eight billion light-years away we are hard pressed to find even the cluster in which our Milky Way Galaxy is embedded, much less the Sun or the Earth. The only planet we are sure is inhabited is a tiny speck of rock and metal, shining feebly by reflected sunlight, and at this distance utterly lost.

To hear Mr. Sagan speak for himself, click here:

Humans won’t survive if we stay on Earth. Michio Kaku explains.
▸
7 min
—
with
Michio Kaku
Up Next
Health

What I learned about disability and infanticide from Peter Singer

In the 1970s, the Australian moral philosopher Peter Singer began to argue that it is ethical to give parents the option to euthanise infants with disabilities.