Throughout its nine-year tour of duty that concluded in 2018, NASA’s Kepler Space Telescope produced a massive amount of observational data. Scientists are still going through it all. Among its revelations were now-confirmed 2,800 exoplanets, with thousands more still being analyzed. A new study of its data suggests that there may be as many as 300 million inhabitable planets in our galaxy. It finds that several of these could be relatively close by, within 30 light years from here.

Co-author Jeff Coughlin stated in a SETI press release that “this is the first time that all of the pieces have been put together to provide a reliable measurement of the number of potentially habitable planets in the galaxy.”

(We previously wrote about a specially designed calculator that determined there could be exactly 36 contactable civilizations.)

The research, a collaboration between NASA, SETI, and other organizations, will be published in The Astronomical Journal — you can see the pre-press version at arxiv.org. 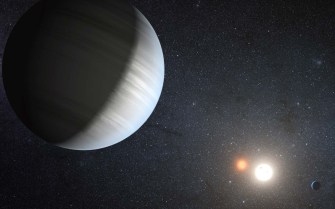 The team that produced the new report was led by Steve Bryson of NASA’s Ames Research Center in California. The authors of the study looked for stars that are similar in size, age, and temperature to our Sun, between 4,527 to 6,027 °C. These stars are either G dwarfs, or slightly smaller and more plentiful K dwarfs. Next, they looked for planets orbiting such stars that ranged in size from 0.5 to 1.5 times the size of Earth on the assumption that they were most likely to be rocky planets like ours.

A big factor affecting habitability is the ability to support surface water. Earlier estimates of habitable planets have focused primarily on an exoplanet’s distance from its sun, the so-called “habitable zone.” The new research also takes into consideration the amount of light the planet receives from its sun as a factor in the likelihood of water. The authors of the study supplemented the Kepler data with spectroscopic measurements from the European Space Agency’s GAIA survey of a billion stars in the Milky Way.

The stars can be dim enough that their habitable zones are close, causing any exoplanets there to be tidally locked, which means the same side always faces their sun. This makes the stripping off of their atmospheres more likely. One of the unknowns is the degree to which a planet’s atmosphere impacts its ability to retain water, though, and for the current research, the authors presumed that atmosphere has a minimal effect on the likelihood of surface water.

The study offers both a conservative estimate of the number of habitable exoplanets orbiting their stars — 0.37 to 0.60 planets per star — and a more optimistic one: 0.58 to 0.88 per star. More than half of galaxy’s suitable stars may have habitable planets.

On a basic level, Coughlin notes, the study means “we’re one step closer on the long road to finding out if we’re alone in the cosmos.”

The research may also prove useful in targeting future study and missions. Says Michelle Kunimoto of the Transiting Exoplanet Survey Satellite group at MIT in Cambridge, Massachusetts, “Knowing how common different kinds of planets are is extremely valuable for the design of upcoming exoplanet-finding missions.” She adds that “surveys aimed at small, potentially habitable planets around Sun-like stars will depend on results like these to maximize their chance of success.”

Michio Kaku believes math is the mind of God.
▸
6 min
—
with
Michio Kaku
Up Next
Thinking

Does it matter if there was a historical Jesus?

The message matters more than the man.