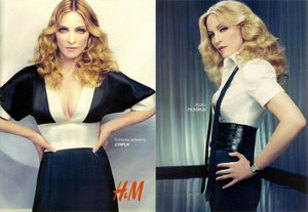 What if Madonna had a sale at H&M to unveil her new special-edition clothing line and nobody came? Judging by the obligatory “empty store” pics in newspapers around the world, this is exactly what happened. Instead of H&M stores around the world being mobbed by young fashionistas desperate to get their hands on the latest fashions from Madonna, the reaction has been “mild” at best. (Instead of hours-long lines around the block, at most stores, it was possible to walk right in.)

From a sales & marketing perspective, this Madonna collection should have been a no-brainer for H&M. Madonna (even the older, 40+ Madonna) is synonymous with fashion and cool clothes. Moreover, she has a best-selling Grammy-winning album that has millions of fans confessing on the dance floor. On top of that, H&M basically patented a proven approach to selling limited-edition clothes from celebrity designers like Karl Lagerfeld and Viktor & Rolf. Finally, celebrities like Kirsten Dunst, Carmen Electra, Gwyneth Paltrow and Drew Barrymore had all pre-ordered pieces from the Madonna collection, so the clothes were obviously wearable and reasonably trendy.

So why didn’t it work out with Madonna this time? From what I’ve read, there are various explanations. Some claim that there was too wide a roll-out (if it’s not exclusive, people don’t want it). Others point out that maybe the clothes were not “innovative” enough. (Who knows, maybe she needed to sell some of those incredibly hot pink leotard ensemble outfits to get people to notice?)

The real lesson, I guess, is that you simply can’t “peek ahead” when it comes to innovation. Some innovations work, but others don’t — no matter how hard you try to tap into a trend or respond to a proven customer demand. There are never any guarantees that a product will take off… That’s what makes innovation so hard — there’s no such thing as a slam-dunk innovation.

With that in mind, I wait impatiently for the new Apple iPhone — will the new product live up to its hype & buzz? (Maybe I’m reaching here, but the Madonna example seems a bit relevant — Apple is a company at the top of its game, with a rabid fan base and a proven method for unveiling new “hits” to loyal consumers. This iPhone should be a slam-dunk… right?)