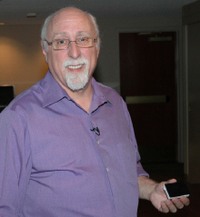 Let’s face it – deep down, you secretly long to create a popular YouTube video clip that you can brag about to your friends and colleagues. About two weeks ago in the Wall Street Journal, personal technology guru Walt Mossberg explained just how easy it is to make one of these clips: “Everyone can now be a video producer. YouTube and other Web sites are filled with short amateur videos created on typical home computers. Even print journalists like me have joined the trend…” With that in mind, Walt walked through the basic tools and process for creating Web-ready videos.

Inspired by Walt, I went out over the three-day holiday weekend and made a quick 4-minute video clip about my visit to the American Museum of Natural History in New York City. (A new exhibit called “The Hall of Human Origins” just re-opened to the public, and has been generating a bit of buzz in the local media). As much as I would like to think of this clip as worthy of the great masters of cinematography (Fellini, Antonioni and Basulto!), it’s basically an amateur hack video edited with Windows MovieMaker software and a basic, run-of-the-mill laptop PC. Even with these rudimentary tools, I was able to put together an “Endless Innovation” video clip with an opening title sequence, closing production credits and soundtrack. (I like to think of it as a template for an upcoming “trailer” for the Endless Innovation blog and will be posting it a bit later this week.)