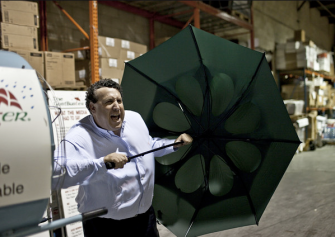 In an article for the Wall Street Journal, Anjali Athavaley recently described why it is so hard to design an umbrella that won’t collapse or flip inside out. It’s not that companies aren’t trying – they are experimenting with space-age materials, testing umbrellas in high-tech wind tunnels and even consulting experts in aerodynamics to find a “perfect” umbrella that doesn’t flip inside out on a particularly gusty day. Any incremental improvements, of course, come with costs.

Once you get to the $20 price point for an umbrella, there does appear to be some improvement in umbrella performance, and at the $100 price point, you can build a superior canopy-style umbrella. However, the problem (from the perspective of umbrella manufacturers) is that consumers are only willing to plunk down $6 for a cheap throwaway umbrella. Once you get to the $100 price point, the size of the umbrella becomes so enormous that it’s completely impractical for anyone other than golfers.

Let’s call it the Umbrella Problem. Manufacturers say that “they have had a tough time innovating because most people aren’t willing to pay much for an umbrella.” As a result, they are locked into a design mindset that “hasn’t changed in centuries.” Even the director of product development at umbrella-maker Totes admits that “[the umbrella] is an archaic thing… it’s fundamentally a stick with spokes with a piece of cloth on it.”

Putting all of this together, I’ve been thinking of a radically new business model for umbrella manufacturers that borrows heavily from the world of (yes) disposable razor blades and disposable ink cartridges. Companies like HP are brilliant at getting consumers to plunk over hundreds of dollars for a new printer, and then buy new ink cartridges on a fairly regular basis (but not so regular that they get too annoyed). In fact, HP makes more money from selling print cartridges than it does from selling printers. Everybody benefits — HP makes lots o’ cash, while consumers feel that they have a state-of-the-art machine that does exactly what they want.

How could this model be applied to the world of umbrellas? I’m thinking that companies like Totes Isotoner could develop expensive, state-of-the-art “sticks and spokes” (for $100+) and then sell consumers cheap, disposable “pieces of cloth” that fit onto these “stick-and-spokes” (for less than $6). Of course, they wouldn’t be able to call them “pieces of cloth” — they’d have to call them something like “Mach II Rain Canopies.” People wouldn’t lose these “sticks and spokes” like they do umbrellas because they would be able to carry them in their bags and briefcases without getting everything wet.

Another idea might be to partner with a company like London Fog to offer a “total rain protection system.” A consumer buys a pair of rubber boots, a rain jacket and maybe a rain hat, all for a very expensive price. Then, the manufacturer kicks in the umbrella as a “freebie.” Anytime, a consumer loses his or her umbrella, they contact the company with a special code and receive a new one free (up to, say, a maximum of 6). The key is that the expensive “rain protection system” subsidizes the cost of the umbrella. Consumers feel like the umbrella is free, but they are instead paying for the coat, boots and jackets. When consumers have already committed hundreds of dollars to a particular brand of “rain protection system,” they have a vested interest in getting the umbrella from the same company and not wandering off to another competitor.

In short, the solution might just be business model innovation, not product innovation.

Any other ideas for how innovative companies can solve the Umbrella Problem using business model innovation?