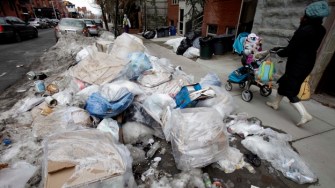 With all the talk out of Washington this week about reduced federal spending, the immediate need for budget cuts, and swelling deficits at both the local and federal level, it’s time to think about ways that cities can do more with less. In other words, how can cities of the future use simplicity to solve the most intractable urban problems in innovative, sustainable ways that won’t break the bank?

In a recent Flash Interview with The Economist, legendary architect and urban planner Jaime Lerner describes his vision for the “smart cities” of the future:

“Creativity begins when you cut a zero from your budget. Sustainability, when you cut two. When dealing with “smart system” technologies, we must always remember to bind our solutions with a commitment to simplicity. Also, having in mind that sustainability is an equation between what is saved and what is wasted. If waste is “zero”, sustainability tends to infinity.”

What’s interesting about this is that Lerner does not see technology as a panacea for what ails budget-strapped urban planners. Instead, urban planners need to adopt simple, common sense measures that are possible to implement even when a zero has been lopped from the budget. As an elected official in Brazil, Lerner had an opportunity to implement some of his ideas — with extraordinary results.

For example, how would you solve the problem of trash piling up on the narrow, winding streets of a city’s slums? U.S. techno-bureaucrats would probably call for costly studies and lengthy administrative RFPs for high-tech garbage removal machines capable of removing trash from these slums. Lerner, however, proposed a much simpler, more cost-effective solution: offer residents of these slums the opportunity to carry out their own trash in exchange for bags of food and free transit passes. It’s a win-win for both sides.

How would you deal with the problem of insufficient budgetary funds to pay for tractors and lawn maintenance crew members to maintain a city’s streets? Lerner implemented the idea of “municipal sheep” which would graze on the park areas for free. Later, the wool from these sheep could be used to fund innovative children’s programs throughout the city. Forget the Tragedy of the Commons — this is the Miracle of the Commons.

This is precisely why “developed nations” might be able to learn from “developing nations.” That trash-clearing initiative from Brazil? In a winter of discontent across New York City, when major blizzards and snow storms made trash removal dangerous if not impossible for city garbage trucks – and garbage piled up uncontrollably on New York City streets – what if New York City had provided a similar type of incentive structure for residents to ferry out their own garbage — or reduce the number of bags they placed on city streets for a 48-hour period – in exchange for something of economic value, like heating credits?