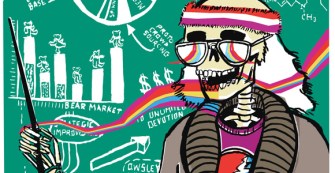 Here’s something that Deadheads could have told you 40 years ago — there’s a lot the Grateful Dead can teach you about running a business. In the March 2010 issue of The Atlantic, senior editor Joshua Green uncovers some of the management secrets of the Grateful Dead. In fact, as Green writes, “the Dead’s influence on the business world may turn out to be a significant part of its legacy. Without intending to – while intending, in fact, to do just the opposite – the band pioneered ideas and practices that were subsequently embraced by Corporate America”:

(1) Focus intensely on your most loyal fans

(3) Increase demand for your product by giving it away for free – “If I give my song away to 20 people, and they give it to 20 people, pretty soon everybody knows me, and my value as a creator is dramatically enhanced.”

correspondence into one archive, look for Dead Studies to take off – if only for the novelty fact alone. On March 5, the New York Historical Society will open the first large-scale exhibit of material from the Dead Archive. After that, there are already plans afoot to distribute the Dead Archive to everyone from musicologists to historians to psychologists to management professors. As Joshua Green opines, “it may only be a matter of time until Management Secrets of the Grateful Dead or some similar title is flying off the shelves of airport bookstores everywhere.”

[image: Management Secrets of the Grateful Dead, via The Atlantic Online]