As soon as I heard these words from  Stephen Hayes through the phone, I sat back in my chair. It wasn’t just the authority of his tone but the sense that he was totally in control of his talent and his vision that made me glad I’d asked him for an interview. Mr. Hayes, a recent recipient of a masters degree in fine arts from the Savannah College of Art and Design (SCAD) is currently showing his master’s thesis, titled Cash Crop, at the Mason Murer Fine Arts Gallery in Atlanta. Cash Crop is comprised of fifteen life size relief sculptures of former slaves that serve for Hayes as a symbolic representation of the fifteen million Africans imported to the New World from 1540 to 1850. It is a must see installation, a massive multimedia piece that is as emotionally riveting as it is aesthetically engaging. 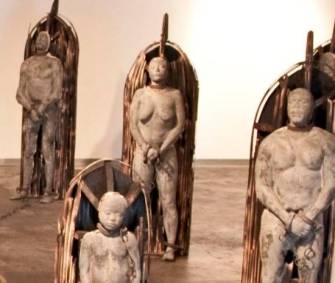 “I am a creator that dreams and enjoys developing engaging objects out of voids. My work is mixed media consisting of wood, clay, fibers, found objects, and recycled materials, in conjunction with printmaking.”

I don’t know what I was supposed to say or think when I first saw Cash Crop. I did what I always do when I encounter something new—try to catalogue it, attempt to deconstruct it, begin to quantify intellectually its discrete elements. But after wandering through the life sized sculptures, the familiarity of each individual model’s features and body parts began to get to me. I finally had to stop when I saw the face of one figure. It was a face of a man whose air of resignation combined with the foreboding sense of fear depicted by his tightly clenched jaws in such a way that the figure seemed to say directly to me “this is how you got here.”

In some ways, it was as if I was seeing in three dimensions an unspeakable, unimaginable level of human suffering that was directly connected to my own past. The chilling collective of finely detailed faces, many of them showing traces of their Ibos and Ashanti and Mandinka origin in the abundant arches of their eye sockets and the lavish flare of their nostrils and the vigorous thrust of their cheekbones and the meaty curve of their lips, totally rearranged my perspective on the Middle Passage, making those harrowing ocean voyages more personal than any history book ever could.

In 1860 slaves as an asset were worth more than all of America’s manufacturing, all of the railroads, all of the productive capacity of the United States put together. Slaves were the single largest, by far, financial asset of property in the entire American economy.

“Again With The Black Confederates”,Ta-Nehisi Coates, The Atlantic 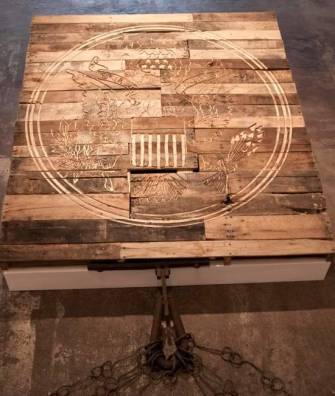 Fabricating every element of the exhibit himself, Hayes showcases a wide ranging talent with wood, clay, iron and recycled materials. He depicted the crucial relationship between this human cargo from Africa and the success of American commerce by attaching the chains from the individual figures to a reconstructed pallet, engraved with the United States logo, that was made from pallets that carry modern day products.  “Slave ships,” he said, “have now mutated into the sweatshops of today.”

Tall, spare, and solemn, if you were to see Stephen Hayes standing next to his installation, you might get the sense that the somber tone and intricate details of his work are in many ways a direct reflection of its creator. In fact, Mr. Hayes is not only the creator, but a part of the work as well—a life sized replica of his own body is one of the figures standing in a back row. But Cash Crop is more than just an aggregation of fifteen lifelike sculptures who carry representations of slave ships boat on their backs. Instead of massing the figures tightly together the way they were during the actual voyages, Hayes uses wide spaces between each piece of sculpture to emphasize the individual identities of these captives, skillfully humanizing one of history’s most harrowing events.

I was curious, though, about one thing. “How did you convince people to have their actual face and body images molded into a sculpture and put on display?”

“Some people did turn me down,” Hayes said. “It was mostly my friends and relatives. They were all down for it.”

“What did they think,” I said, “when they saw the finished work?”

“They were amazed to see themselves. Some of the others who didn’t do it now wish they had participated.”

Stephen Hayes is no overnight sensation. He has been working at some form of artistic expression practically his whole life. A North Carolina native, he has a BFA from North Carolina Central University to go along with his brand new MFA from SCAD.  Hayes has also studied ceramics under John Gill and Walter McConnell at Alfred University.

“I was mainly an abstract artist when I came here,” Hayes said. He talked briefly about his deliberate resistance to the elevation of the theory of art over the process of making art.  “I want my art to capture someone’s attention. I’m not making art for artists.”

Cash Crop certainly fulfills Hayes goal, with an arresting montage that seemed to utilize all of his experience with wood, clay, found objects and recycled materials.  The most remarkable thing about Cash Crop is how the public interacts with it. 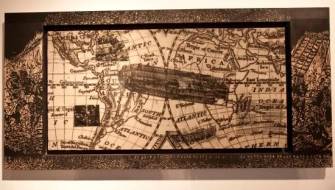 All Photographs courtesy of Stephen Hayes

Perhaps wormholes will no longer be relegated to the realm of science fiction.
Up Next
Surprising Science

Researchers have demonstrated that “the neural circuitry that controls the sleep/wake cycle in humans may also control the sleep patterns of 17 different mammalian species.