Earlier this summer I was feeling down in the dumps about libraries. I was spending the month of June in Flushing, Queens, a melting-pot neighborhood where the local library bustles with patrons of all ages. Unfortunately, like much of the Queens Library system, the Flushing branch had been threatened with budget cuts and severely curtailed hours. For no good reason, it looked as though large numbers of immigrant kids, intellectually curious retirees, and other decent folks would soon be limited in their access to this community hub. It was the kind of crisis that would usually get solved in the movies by a ragtag band of teenagers and a little electric boogaloo, but this was harsh reality, and no hope, funky or otherwise, seemed to lie in store.

Around the same time, I read this article in The New York Review of Books. “Across the United States,” according to poet Charles Simic,

…large and small cities are closing public libraries or curtailing their hours of operations. Detroit, I read a few days ago, may close all of its branches and Denver half of its own….“The greatest nation on earth,” as we still call ourselves, no longer has the political will to arrest its visible and precipitous decline and save the institutions on which the workings of our democracy depend.

This last sentence reminded me, with a little ironic pang, of democracy as E. B. White defined it:

“Communion” hits it on the nose. Simic points out that in many towns, libraries are the only places “where both grownups and children are welcome to sit and read in peace.” I would go further and argue that they’re among the last truly public spaces left to us. Where else can we congregate without an admissions ticket, or money enough to afford something on the premises? Parks, maybe, but those aren’t frequented year-round, or readily accessible in poorer communities. 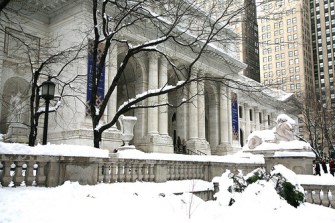 Shared institutions like libraries do more than keep a democracy working: they make maintaining one seem worth the trouble. Without the human connection they provide, America would barely seem like a common reality, much less a communal responsibility.

Hence my early summer blues; but as it turned out, all was not yet lost. In protest against the budget cuts, some savvy Queens Library members set up an online petition, which I signed at the encouragement of a friend. It looks like we weren’t alone, because a couple of weeks ago I received an email with the subject “Thank You! Library Services Saved”:

We have wonderful news to report….Your voices were heard loud and clear. The Mayor and the City Council came together to restore the lion’s share of the proposed reduction to libraries, ensuring that libraries stay open at least 5 days per week in every community…

Especially during a month dominated by less encouraging budget news, this felt great to read. My friend and I signed an electronic thank-you note to city officials via the QL website. And at sunset that same day, the citizens of Flushing congregated on the library steps for an impromptu, multiethnic victory boogaloo.

I may have imagined that last part, but the rest of it is true—and if it can happen in one neighborhood, it can happen in others. Weak as America’s political will is, we’re still a nation that exercises it from the bottom up, not the top down. Simic says the library closings are unpopular nationwide; I hope he’s right. I hope more than half of the people disapprove of them, and will register their disapproval through petitions and at the polls.

Of all the elements mentioned in White’s definition, libraries might well be the secret cornerstone. As long as we have them, American democracy will remain “the mustard on the hot dog” (White again). If we lose them, it risks becoming the fly on the watermelon—the brown spot on the corncob—the sour relish of complacency on the undercooked bratwurst of apathy, eaten at a barbecue of no return.

Or at least a much sadder version of what it was.

Related
Thinking
Visual thinking: How to comprehend animal consciousness
Humans are good visual thinkers, too, but we tend to privilege verbal thinking.
Strange Maps
The world’s longest straight line connects Portugal to China
It’s nearly 20,000 miles long.
The Well
This is what the fourth dimension looks like
Left–Right, Back–Forth, Up–Down. What’s the fourth dimension?
▸
3 min
—
with
Brian Greene
The Past
How the death of alchemy gave birth to modern science
Far from practicing witchcraft, the experimentation of medieval alchemists helped bring about the Scientific Revolution.
The Present
How heat pumps of the 1800s are becoming the technology of the future
Innovative thinking has done away with problems that long dogged the electric devices — and both scientists and environmentalists are excited about the possibilities.
Up Next
Guest Thinkers
How American Artist Robert Henri Found Himself Again in Ireland
The first time you see the name Robert Henri, it’s natural to pronounce it “ahn-ree.” Although the artist was partly of French descent, he preferred “hen-rye,” perhaps as a nod […]