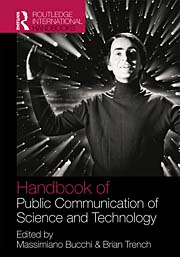 I recently received copies of two relatively newedited volumes on science communication and public engagement. The volumes include research and perspectives from an interdisciplinary collection of mostly European scholars. I am preparing a review essay on these books for the journal Political Communication, drawing connections to research on policy debates, communication influences, and citizen engagement generally. I will post a draft of this review when complete. In the meantime, these twin volumes are strongly recommended, and are perhaps the best introduction to the major issues in science communication. The only downside is their cost, though I suspect that most university libraries carry them.