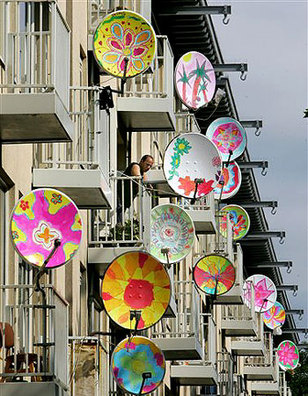 Who said satellite dishes in urban neighborhoods had to be an eyesore? Boing Boing points to a photo from Fox News that will change the way you think about satellite TV:

in Amsterdam, Netherlands. The project to ‘pimp’ the dishes is an

the city referred to as ‘satellite city,’ inhabited predominantly by

first and second generation immigrants. The hooks on the roof are used

rope and pulley, as the staircases are narrow.”

Not only are these Dutch immigrants innovative in the way that they move furniture in and out of buildings, they also have an eye for design!