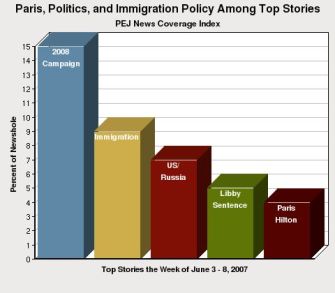 As we argue in the Nisbet & Mooney Framing Science thesis, one reason that traditional science communication efforts fail to reach the wider American public is that the media tend to feed on the soft news preferences of the mass audience, making it very easy for citizens who lack a strong interest in public affairs or science coverage to completely avoid such content and instead pay only close attention to infotainment sagas.

As a result, climate change, despite receiving record amounts of media attention historically, still routinely fails to crack the top 10 news stories, as tracked by the Pew News Index. Last week is a great example. As Bush and G8 leaders negotiated possible directions forward on climate policy, the issue failed to crack the top 5 news agenda stories. Instead, the news was dominated by the juggernaut narratives of Iraq, the 2008 Horse Race, immigration, and the jail house drama of Paris Hilton.

Indeed, coverage of Paris Hilton pales in comparison to the mounds of media attention heaped on the death of Anna Nicole Smith. Here’s what Pew concluded in analyzing coverage trends during the first quarter of 2007:

For four straight weeks–from February 4 through March 2–it was a top-10 news story. It also re-surfaced as a top-10 story in the week of March 25, when the autopsy report concluded that she had died of an accidental overdose of prescription drugs. By the end of three months, Smith’s death–and the many related issues–rated as the eighth-biggest news story of the year so far. It filled 2% of the overall newshole, finishing just ahead of the newly elected Democratic majorities in Congress and just behind the Valerie Plame case that led to the conviction of the Vice President’s top aide, Scooter Libby.

In comparison, according to Pew, global warming made up 1% of the total newshole. All other environmental issues combined made up less.

The biggest culprit in running with the sensationalism narrative is not surprisingly cable television news, especially Fox News where Anna Nicole Smith accounted for 10% of its news time during the first quarter of the year, the second biggest story at the network.

With coverage reaching into 30% of the newshole during the height of the saga, the Smith story was the third biggest on cable for the entire first quarter of the year. It filled 7% of the newshole, finishing behind only the Iraq policy debate and the presidential race. On daytime cable, with its greater focus on live coverage and breaking events, it proved to be the biggest story (11%). There were also differences by cable channel. For the quarter, it was the Fox News Channel that devoted the most time to the subject. The Smith saga accounted for 10% of the network’s overall coverage, narrowly finishing as the second biggest story behind the Iraq policy debate (also at 10%). Smith was the fifth-place story at both CNN and MSNBC, where it accounted for 4% and 6% of the coverage respectively. The only other platform in which Smith’s death ranked in the top 5 stories was network morning television, where it was the fifth biggest story overall at 4%. It was the third biggest story (6%) on CBS’s “Early Show,” the fifth biggest topic (4%) on NBC’s “Today” and the seventh biggest subject (3%) on ABC’s “Good Morning America.”

The Exploratorium Joins the Blogosphere

Mary K. Miller of San Francisco’s The Exporatorium has launched a new blog called The Accidental Scientist. The blog is focused on introducing readers to the ways in which scientists […]