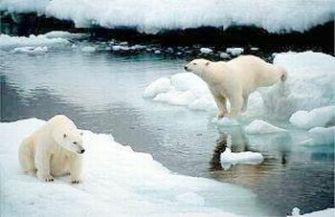 The recent retreat of Arctic sea ice is likely to accelerate so rapidly that the Arctic Ocean could become nearly devoid of ice during summertime as early as 2040, according to new research published in the December 12 issue of Geophysical Research Letters. The study, by a team of scientists from the National Center for Atmospheric Research (NCAR), the University of Washington, and McGill University, analyzes the impact of greenhouse gas emissions on the Arctic. Scenarios run on supercomputers show that the extent of sea ice each September could be reduced so abruptly that, within about 20 years, it may begin retreating four times faster than at any time in the observed record.

The study, its media release, and the subsequent news reports feature powerful visuals of what an “open ice” Arctic might look like. It’s a visual metaphor that compares favorably with the ozone hole.

There is a reason that polls show that the public remains more “worried” about the ozone hole than they do global warming, and continue to confuse the ozone hole with the separate issue of global climate change. The reason is that the ozone hole is a powerful visual metaphor, a frame device that galvanizes public attention and concern. Apart from the pictures, the term itself is provocative, and instantly primes the visual image in the public’s mind. 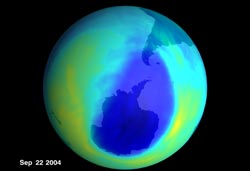 And now scientists are producing similar visuals to communicate the findings on the melting of arctic ice. Check out the simulated computer video at this link. If NCAR wanted to magnify the video’s impact, they (or someone) would upload it to YouTube and Google Video.