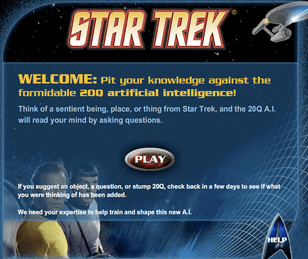 In everyday life, people have what social scientists refer to as “spare cycles” — little moments of free time, that if properly utilized, could represent a huge untapped source of innovation. Those little moments of free time really add up. According to scientists like Luis von Ahn, the total amount of “spare cycles” amounts to billions of hours per year for the U.S. economy.

It’s not easy getting people to turn their “free time” into unpaid work, so, not surprisingly, online casual games have emerged as the obvious way to convert “spare cycles” into new innovation. For example, solve a reCaptcha, and you’re helping to digitize the world’s media archives. Try your hand at FoldIt, and you’re actually helping scientists learn how proteins fold.

Toy manufacturer Mattel is tapping into this powerful idea of “spare cycles” with the introduction of an online casual game called Star Trek 20 Questions. You pick a character from Star Trek, and the computer then asks you 20 questions, trying to guess who the character is. As more Internet users play the game, the computer becomes smarter, learning from its previous mistakes. On the surface, the game is just an amusing online diversion. On a deeper level, though, learning how consumers interact with the game is helping Mattel build an online artificial intelligence engine that will provide the basis for a future video game product. Internet users, essentially, are doing the “heavy lifting” at no additional cost to Mattel. In other words, the company is converting the “spare cycles” of tens of thousands Internet users around the world into future innovation.

For more on the power of “spare cycles,” check out Chris Anderson’s Long Tail blog post from May 2007. His classic example of a “spare cycle” was the untapped productivity that a simple online game like Solitaire represents. What if every person playing Solitaire on his or her computer was actually contributing to something bigger and better?

FULL DISCLOSURE: I first learned about Star Trek 20Q from my colleagues at Electric Artists, who work on a number of branding and marketing campaigns for clients in the media and entertainment industries, including Mattel.

Are you on the “buy” side or “sell” side of innovation?

The recent economic turmoil has started me thinking about being on the “buy” side and the “sell” side of innovation. Almost any industry has a “buy” side and a “sell” […]