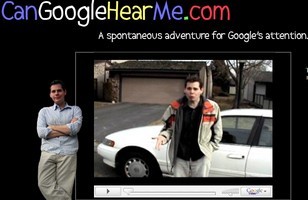 Have you ever had an innovative business idea and wondered whether Google would be interested? Usually, this doesn’t go much further than a simple blog entry or a comment left on someone else’s blog. However, one 25-year-old from Idaho decided to go several steps further, so convinced was he that he had a business idea worthy of pitching to Google directly. He created a web site, Can Google Hear Me, documenting his communication with the company and flew out, unannounced, to the Googleplex in Silicon Valley, armed with nothing more than a laptop PC and a Flash presentation. It was, quite simply, a spontaneous adventure for Google’s attention:

A couple of years ago, he made some half-hearted attempts to reach

Google by telephone and e-mail. But he

got nowhere. Then this past Christmas, his father got sick and nearly died, and

Stanton, 25, of Boise, knew if he was ever going to make his dad proud,

he’d better make his move soon. He decided to go to Google, show up

unannounced and make his pitch. He bought a plane ticket for a flight

on Feb. 11 and the die was cast. “I figured the worst that could happen was I got down here and found

myself spending a week in Mountain View,” Stanton said in a telephone

Once he was there, he would pitch his idea to the folks at Google.

business model. “So I figured I’d get down here, walk in through their front door,

ask for a meeting and one of two things would happen: They could give

then I’d go home, or they’d turn me away at the door.”

So how did it all turn out? Well, he finally ended up getting a business meeting with Google to discuss the idea. Since then, he has become a minor celebrity on the Internet, thanks to his spontaneous adventure and inner conviction:

“Since his site went live, Stanton has become the talk of the blogosphere. Some famous bloggers, including Microsoft’s Robert Scoble, who met with Stanton in an Apple store, and AOL Inc.’s vice chairman Ted Leonsis have blogged about his improbable quest.

He has received e-mails

from around the globe offering good luck. “Fascinating story. If your

idea is half as good, I’m sure you’ll go far,” was one e-mailed

response. “Wow … ur really inspiring dude … I wish you all the best

… hope ur all dreams come true :-),” said another. Someone even wrote

a theme song for him. And last week, he had a nonbusiness lunch with a

“The Business of Innovation” TV special

I’ve been glued to CNBC for the past two nights, trying to make sense of that unexplained global sell-off in the world equity markets that started in China and ended […]