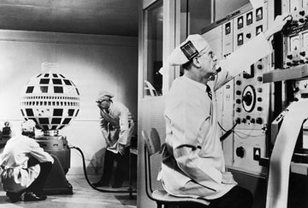 The notion of corporate R&D is undergoing a radical transformation. Instead of viewing research and development as separate silos of an organization staffed by separate employees, companies are now working to fuse together R & D into a new innovation paradigm that places a premium on bringing products to market as quickly as possible. As The Economist explains, in the old days, companies like IBM, Xerox and AT&T created vast research organizations staffed by white-coated scientists, who in turn spent R&D lavish budgets in order to come up with The Next Big Thing. These massive R&D organizations are now a thing of the past:

corporate laboratories are either gone or a shadow of what they were.

Companies tinker with today’s products rather than pay researchers to

look to mergers and acquisitions with their peers, partnerships with

universities and takeovers of venture-capital-backed start-ups. The

traditional separation of research and development… is rapidly disappearing, especially in the information-technology

However, this transformation does not mean that the glorious era of game-changing technological breakthroughs is over:

“The approach to R&D is

afford. In their heyday, the big firms dominated their markets.

dominated the mainframe-computer business and Xerox was a synonym for

photocopying. The companies themselves saw the cost of basic scientific

research as a small price to pay for such power.

technology firms are much less vertically integrated. They use networks

of outsourced suppliers and assemblers, which has led to the

splintering of research divisions. Even though big American firms still

spend billions of dollars on

R&D, none has any intention of filling the shoes left empty by Bell Labs or Xerox PARC. Research and development… are once again becoming entwined. Old-fashioned R&D is losing its ampersand.“

The new paradigm involves integrating researchers into the everyday flow of the business. Instead of being given carte blanche to dream up new ideas, however, these researchers are typically assigned to commercially-viable projects and given specific time frames. As The Economist explains, the ultimate goal at companies like Microsoft, Google and IBM is to blur the distinction between “research” and “development,” such that products emerge even faster from the research pipeline.

Women have made incredible gains into STEM fields, but they continue to face gender biases in the workplace.
The Present