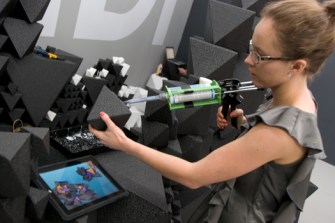 The current issue of Wallpaper* magazine – in addition to its feature on the global Design Awards 2011 Winners – has a wonderfully thought-provoking article about the growing popularity of “live performances” in the design world. In short, design is moving from a mysterious, tightly-guarded secret that happens behind closed doors to something that is performed in full public view:

“Designers used to be people behind the scenes. No longer… Designers are increasingly finding themselves in the business of a different sort of production – one that deserves an audience. While once, the drawing boards, the prototyping, the moulds, the models and the mess were all kept hidden, and the finished product unveiled in a ‘ta-da’ moment, these days it’s the process that everyone wants to see…”

Perhaps the best analogy is the “open kitchen” now found at many of the best restaurants in the world — instead of hiding their craft from the world, chefs now openly embrace public viewing of how their dishes are made from scratch. With that in mind, Wallpaper* cites a handful of interesting examples of the “live performance” concept being carried out in the design world:

(1) Neville Brody’s Anti Design Festival in London, which featured real-time designing and printing in response to events as they unfolded in real-time

(3) Craft Punk, a collaboration between Design Miami and Fendi

(4) Modern Primitives, a collaboration between Fendi and U.S. architects ArandaLasch

The obvious question, of course, is: To what extent will the world’s elite design firms embrace the “live performance” concept of design? Certainly, opening up the design process will change the way we think about design:

“While a decade ago prestige was associated with closely guarded methodologies and highly developed techniques, design as performance is nothing if not open source. Intellectual property is also worth considering, then, especially as unlike art, craft or cooking, design processes are as much dependent on ideas as they are on skills.”

Even if live “design performances” never catch on, they may serve an ancillary role – as a way of identifying the world’s up-and-coming design talent: “A live performance is a sure-fire way to spot [raw talent]. Or the lack of it. While you don’t want to be under the spotlight unless you know what you are doing, for those whose work might otherwise be an acquired taste, it is surely the best way to demonstrate why they do what they do and the way they do it.”

via: Wallpaper* and PSFK

You might think it’s impossible to run out of wind, but Europe’s “wind drought” proves otherwise. And it’s only going to get worse.
Up Next
Culture & Religion