By all accounts, Nick Clegg is not a happy man. This week his candidate trailed into a truly humiliating sixth place in the Barnsley Central by-election, losing his deposit and coming behind both Nigel Farage’s UK Independence Party and the far-Right British National Party.

Not all that long ago, Clegg’s Liberal Democrats were seen as the great insurgents of politics, mopping up the protest vote as they grabbed headlines with sensational by-election wins.

How things have changed. On the basis of this latest performance in South Yorkshire, Clegg’s party may soon be picking up fewer votes than the Monster Raving Loony Party. The Barnsley by-election disaster follows a particularly miserable fortnight for the Lib Dem leader.

To begin with, he was caught on the hop  by the crisis fast unfolding in North Africa. David Cameron was visiting the Middle East, and Clegg was in Britain when he was asked by journalists if he was the ‘acting Prime Minister’.

Sipping from a mug with ‘Deputy Prime Minister’ emblazoned on its sides, an insouciant Clegg replied with jaw-dropping infantilism: ‘Yeah, I suppose I am. I forgot about that.’

He went on to say he was hoping to take the end of the week off with his children: ‘Someone else will have to do it [the job] then.’

Clegg duly took himself off to the ski slopes of Switzerland – just as Libya began tearing itself apart and the sheer inadequacy of Britain’s efforts to rescue its citizens stranded in the Libyan desert became apparent.

Clegg’s astonishing, lackadaisical approach is vaguely reminiscent of that shown in 1979 by former Prime Minister James Callaghan, who was neatly, if unfairly, paraphrased as saying ‘Crisis, what crisis?’ when he returned from an IMF Conference in sunny Guadeloupe to a strike-torn Britain shivering in the Winter of Discontent.

Say what you like about former Deputy Prime Minister John Prescott, but at least he knew when he was supposed to be in charge.

But the tragedy for Mr Clegg is not just his manifest failure as Deputy Prime Minister. It’s the deepening anger among rank-and-file Lib Dems and MPs who are becoming increasingly aware of the heavy price of Clegg’s Faustian pact with power. 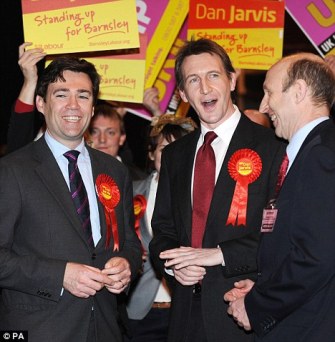 A good hiding: Thursday night’s Barnsley by-election result was a moment for Labour’s Dan Jarvis (centre) to celebrate. For the Liberal Democrats it was a humiliation

Up and down the country, Lib Dems are seeing support for their party demolished – polling and morale are both at an all-time low. We may be in government, they are saying, but will it cost us our beloved party?

Of course, there are those who say the Barnsley poll result is simply the inevitable result of the Lib Dems being in government just as the cuts are beginning to bite. Governments usually get a good kicking in by-elections, and this one is no exception.

But many – no, most – Lib Dems are nothing like as sanguine. After all, the speed of the party’s descent in popularity since Nick Clegg became Deputy Prime Minister is staggering.

In those halcyon days just before the election, when he surprised everyone with his performance in the televised debates between Gordon Brown, David Cameron and himself, the party stood at 35 per cent in the polls. Today, it is hovering at around ten per cent.

In those few weeks when he was riding high, Clegg promised a ‘new politics’ and castigated the two other parties for their tired old ideas. How hollow his words now sound to those party supporters who have sacrificed everything to give him his moment in the sun.

How harsh they must find it to swallow U-turn after U-turn — from VAT increases to tuition fees, spending cuts and immigration policy. And only to be wiped out in the polls.

Little wonder that Liberal Democrats, MPs, councillors and activists alike, are now looking as though they have just chewed their way through a swarm of wasps.

Clegg can’t be happy either that the city of Sheffield was chosen by party managers, in headier, happier days, to host the Liberal Democrat Spring Conference, to be held in just over a week’s time.

For the conference will see the Lib Dem activists rounding on him as never before.

And while the city council has been meeting in recent days to discuss making savings amounting to around £80 million, some £2million is to be spent erecting a six-foot-high fence around the conference centre — and a ‘ring of steel’ to protect Nick Clegg and the Lib Dems from furious voters.

Even the choice of the phrase ‘ring of steel’ provokes furious reaction in Sheffield, which takes pride in being known as ‘Steel City’.

Many locals have still not forgiven Clegg for what they saw as his massive betrayal of local firm Sheffield Forgemasters, when he refused to persuade the Government to provide an £80million loan which was designed to help it win orders from the British Nuclear industry and create 200 new jobs. 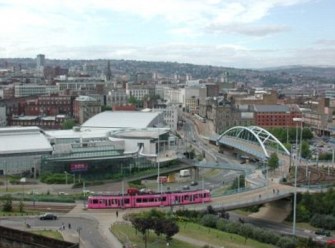 Hard times: The Liberal Democrats are holding their Spring conference in Sheffield – a city not sympathetic to the party

In Sheffield Hallam, the prosperous constituency represented by Nick Clegg, the mood towards their MP  is unforgiving.

Locals here are fully expecting that a banner first seen at the time of the Forgemasters surrender will make an appearance at the Lib Dems’ Conference. It reads simply, ‘Sheffield against Clegg’.

One disillusioned voter who supported Clegg at the last election tells me that members of her bowls club will ‘never support Nick Clegg again’.

And while the membership of one Sheffield Hallam bowls club may not constitute a professional polling sample, locals believe that Clegg may only be able to hang on to his seat at the next General Election if the Conservatives agree not to run a candidate against him.

The Liberal Democrats’ Sheffield Spring Conference is supposed to be Nick Clegg’s springboard for a successful round of local election results on May 5. But Ed Miliband, cheered by this week’s result in Barnsley Central, where a Labour candidate won, is hoping that a whole string of Lib Dem-held councils could come falling his party’s way.

Labour sources fight shy of predicting that some Liberal Democrats MPs are now so disenchanted that they are considering defecting to Labour. But they do expect to see significant defections by councillors before and after the May local government elections.

According to Labour sources in London, the party has been approached by a number of councillors in the East End who are thinking of defecting.

And it is becoming increasingly clear that a number of Liberal Democrats MPs are increasingly unhappy at the political cul-de-sac that they find themselves in. Their numbers include Bob Russell, Charles Kennedy, Mike Hancock and Menzies Campbell. 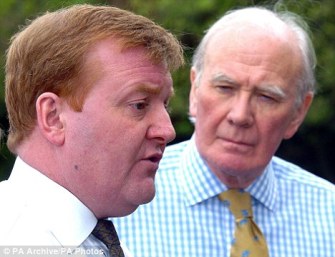 Clegg will be nursing the hope that however bad the results may be for his party in the spring local council elections, a majority of voters will vote ‘yes’ in the national referendum on voting reform.

Now that the 40 per cent turn-out requirement for that vote has been dropped, many Liberal Democrats are confident of winning a vote for the Alternative Vote system (AV).

But even this could prove to be something of a poisoned chalice for Clegg. Altering Britain’s electoral system is a major constitutional change and with it will come new constituency boundaries – a prospect already infuriating sitting MPs of all parties.

If the turn-out in the AV referendum is as low as it was this week in the Welsh referendum – with only 35 per cent bothering to vote – the cry will inevitably go up that only a small minority of the electorate have voted for a new system granted to Clegg by Cameron to save him and his party’s skin.

The truth is that both the fate of Clegg and his once proud party are now dependent on the goodwill of Cameron and the Conservatives. Lib Dems have nowhere to go, so are likely to cling on unhappily in the Coalition with their existing leader for the time being.

But the this week’s by-election  result seems to confirm many a party activist’s worst fear – that, as an independent party, the Lib Dems are in their death throes.

This article by Mark Seddon first appeared in the Daily Mail www.dailymail.co.uk

Between the WikiLeaks scandal and the ongoing crisis in the Middle East, Frederick Siedel’s “Our Gods” is the perfect poem for our times.