When Does Teen Mobile Usage Become An Addiction? How to Mitigate Excessive Use 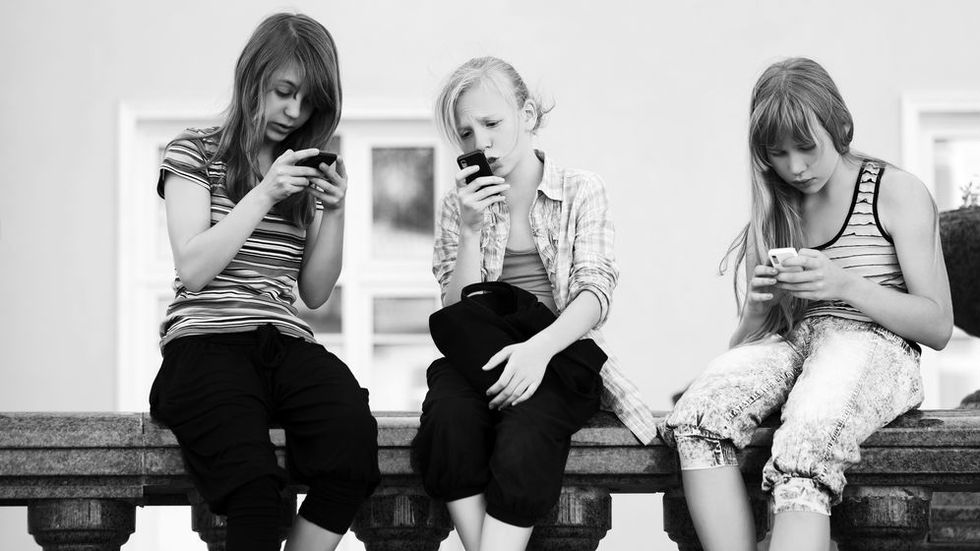 According to a survey by Pew Research Center, 25 percent of adult Americans had smart phones in 2011. Fast forward a year, and that percentage is now up to 45 — this number includes almost half of all U.S. adults, and it surpasses those who have regular cell phones. Teens are following right behind adults, but are teens becoming addicted to smart phones?

Image via Mike-OnTheLeftInVictoria on Blogspot

Addiction is commonly defined as something that interferes with you living your life. Some examples include the following:

Inability to keep a job because of the addiction.

Harmed and/or lost relationships as a result of lying to justify the chosen addiction.

Positive growth such as staying healthy, creating healthy relationships, and progressing in life are all made secondary to the habit.

So when it comes to your teen's "addiction" to their cell phone, it probably isn’t a true addiction, per se. But according to a study done by Intersperience in the UK, 60 percent of teens would feel anxious if they didn't have their phone and would rather live without Facebook, chocolate, and TV than without their phone.

What Can Your Teen Do?

Image via ALearnersDiary on Blogspot

To ensure phone usage doesn’t become an addiction, here are some things teens can do to prevent excessive use -- even if they have the latest, greatest smart phone or a T-Mobile no contract phone.

Respect Conversations With Others: Texting and tweeting shouldn't come between real human contact, thus being distracted by a phone can harm relationships.

Learn To Recognize Bad Habits: One reason teens turn to smart phones is boredom, causing this behavior to become a habit. Realizing this can help your teen resist checking their phone out of habit.

As a parent, there are some things that you can do to help your teen avoid becoming too attached to their phone:

Use a Bucket to Enforce No-Phone Family Time: One effective way is to get a bucket and have everyone place their deactivated devices inside it during family time (meal times, relative visits, board game nights, etc.). Not only will this help to teach your teens about phone etiquette, but it will also allow you to set an example by abstaining from your own phone usage.

Set Alerts to Monitor Phone Usage: These days, most phone carriers will allow you to monitor text, phone time, and data usage for all the phones attached to your account via mobile apps and text / email alerts. You should take advantage of all this data and keep an eye on your teen’s usage. Use it as a baseline to establish ground rules, and talk to them if their usage seems excessive.

Consider Pre-Paid Phones Instead of Prohibition: For habitual violators, you could consider using a pre-paid plan instead of instituting outright phone prohibition. That way your teen still gets the opportunity to exercise discipline and learn to ration their phone usage. And if they fail to do this, the phone will become a useless brick until you choose to add more time and data. Thus, a logical set of consequences will result from their overusing the phone.

As the world changes, we have to adapt, including how we raise our children. Whether you have teens yet or not, parents will want to consider the issue of teens and cell phones.