In Three War Stories, David Mamet explores redemption and forgiveness in the context of conflict. In The Redwing, excerpted here, a 19th Century Secret Service naval officer recounts his own transformations during the course of his service and imprisonment. 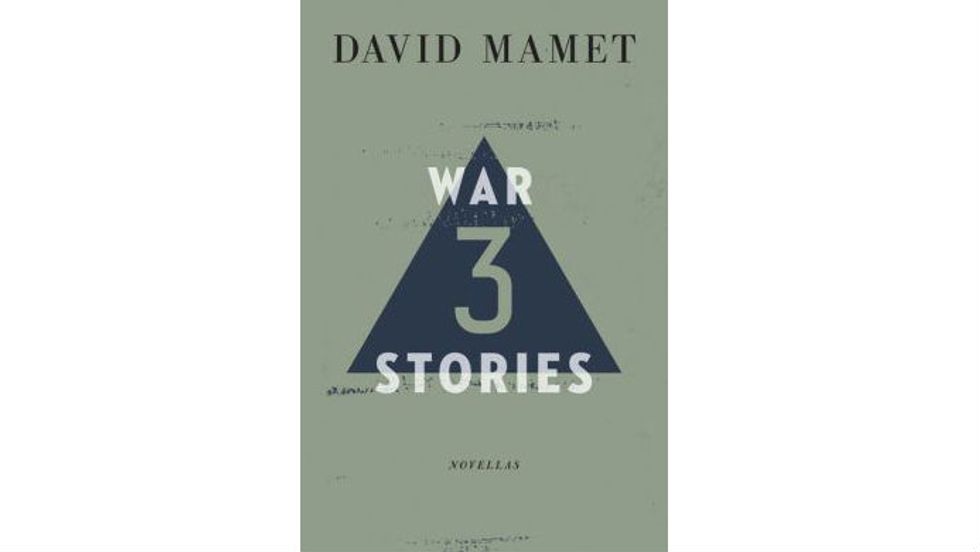 In Three War Stories, David Mamet explores redemption and forgiveness in the context of conflict. In "The Redwing," excerpted here, a 19th Century Secret Service naval officer recounts his own transformations during the course of his service and imprisonment.

Advanced age, accompanied by reasonable health, is generally accounted a blessing. I do not know that it is so, and I suspect that such proclamation is made solely by those ignorant of the actual nature of age. For though age awards, to most, both increased time and ability for reflection, such leisure allows or suggests the question "To what end?"

Youth, it is said, is wasted on the young, but it is not wasted. It is enjoyed, in all its terror, lust, and exhilaration. That it is spotted, that it contains periods of fear, of uncertainty, of loneliness, and of self-doubt, is only to say that it is a time of life; age, and that age possessing the much-vaunted time for reflection, is, in its essence, empty of these. That is the sum of this prized philosophic disposition. That such disposition might be employed in philosophy rather than rage is, arguably, not a societal invitation to share wisdom but rather to display a non-objectionable retirement, in the absence of any other usefulness.

I could, at one time, split a playing card, turned edge-on, with a pistol ball, at twenty-five yards. What merit has this recollection? Or that women once found me attractive. They seek protection, and thus, always, the armed man. I made money by writing. And supported many people by it. That I count as a major accomplishment, and as a gift that I enjoyed this endeavor. The fires of youth, long self-described as banked, have, in fact, long been cold, and gone is the thirst for new acquaintance, let alone adventure, whether in the flesh or in those fantasies by the transcription of which I supported myself during those many years. But, in spite of this dreary stoicism, I find and am happy to find in myself what I must describe as an enthusiasm to set the record straight, to, as we say in the Navy, "regularize the Log."

This process, here, as there, may be used not only to supply that information lost in the necessity of action, or rendered illegible by battle, or the Sea, but to reform the account, unconsciously or no, in light of an overriding conception.

I hope that such may not be found to be solely the author's self-love, or wish for approval. I do not think that this is the case, nor that he has employed the reader's time and patience to the end of that confession, which is finally but self-aggrandizement or boasting. I hope these corrections, written primarily to still the conscience, may, as an independent composition, have the capacity to divert or a muse.

They asked me did I want to go to sea, and I said, "No." For I saw no profit in it. But then I went to sea. I believe they were nonplussed by my lack of adventurousness, or took it for a want of spirit. And perhaps they were not wrong. For though I have done certain notable things, my great interest, then as now, was primarily to observe, by which, I believe, I must mean to consider. My travels, then, were, if I may, by way of being a goad to my consideration, which you may think strange, in light of the things it fell to my lot to do.

But as my exploits had to do almost exclusively with the preservation of life, and as the life was mine, I did them as a matter of course, as would you have done; while the products of my imagination always seemed to me the truer adventure.

For pirates are, after all, but criminals; and the ravenous shark, if one is its desired victim, merely the parish bull writ large.

My friends, on my return, I know, found or pretended to find this attitude preposterous, as have the various critics who, faced with the reality of the author to whom they have accorded that highest accolade, the confession of having been amused (in the odd case "enchanted"), rendered, or, indeed, performed, the silent verdict of having been, in my presence, bored.

But what matter, I asked them, as I ask you, if the incident of the whale were true? Would such truth make the chapter more enjoyable? I do not see how. It was my presence, then, or the illusion of the possibility of verification which made my presence, to them, onerous.

For they asked. And why should I have lied? At the first, upon the book's reception, I considered it my right to tell the truth. But which reader or reviewer, I found, would prefer the mottled or inconclusive truth to the "finely wrought tale"? None of them. And if the "truth" had been, in itself, conclusive, what would have driven me to write the book?

Curiously, a few bizarre or preternatural instances which I related as they occurred have been tagged by more than one reviewer as fantasies and a "blot on the verisimilitude" of the production.

On reflection, I concur. They are. And perhaps I included them out of a perverse desire to reassure myself that I am not, in toto, a fraud -- that I have both suffered and traveled, and that, though I now support myself by the pen, I was once, to earn my bread, a sailor.

I will not dwell upon my first taking ship, nor on the trials and initiations, pertinent and merely customary, which befall any first voyager. The incident of "Crandall" is, of course, treated in the novel. That was neither his name nor his demeanor; nor can he be identified from reference to those characteristics I assigned to him for the express purpose of concealing his identity.

In life he was, and I use the word advisedly, evil; and he was intelligent enough not only to foresee the various ill results of his domination, but to work constantly to refine them.

It was not my lot in reality to have seen him actually among the castaways, for he died before the wreck, and never knew the trials of those months in the boat. Nor did I, as one reviewer has suggested, "give him a lift," a forecastle term meaning to help a miscreant over the side. Though I did fantasize his death in detail, after the flogging.

I berated myself then for my cowardice, as a better man, I felt, would have called him out and fought him there on the deck, though it meant death at the yardarm. But I considered the coward's way, which is to say a lift over the side, and mitigated, in my mind, the murder by grappling myself to and falling with him, through the air and into the deep, his eyes speaking that terror which was only increased by his vision of the triumph in my own.

The stripes heal. I have never considered the scars of the flogging a mark either of shame or honor. I have, of late, on accession, perhaps, of some distance or wisdom, or the understanding that they may be the same if one considers them so, begun to accept that, just as one is accorded honor on ship for the stoicism with which he may bear his whipping, one may acquire honor in allowing memory to heal, and in cessation of importuning either God for an explanation or the Devil for revenge.

It was Margaret who, as is her practice, in a characteristic aside, the tone of which might indicate equally a commonplace or a profound truth, prompted this suggestion of philosophy. "On ship," she asked, "after a man was beaten, was the sympathy with which the crew received him affected by their opinion of whether or not the flogging was deserved?"

For, of course, it was not. Their, I will not say "sympathy," for that is too commonplace a term, their verdict, rested not upon the justice of the punishment, but on the courage of its recipient.

For which of us, I understood to be the meaning of her seemingly offhand remark, does not suffer, to his mind, unjustly? And who is to say what any man deserves?

In the night watches, every sailor thinks about God.

He may, if it is his nature to name his thoughts, refer to the subject of his ruminations as The Universe, or The Nature of the World; but I am not reluctant to identify the subject of my inquiries as The Almighty.

Blake, in the novel called Simmons, went mad in the boat.

All of us saw its genesis, and it was not, as fictionalized, in the decision to eat the first of the dead.

Blake was mad long before then. But the cathartic event was not the onset of cannibalism (which, after all, was inevitable), but the appearance of a cloud. The cloud appeared on the horizon, which, from the water, lies at about eleven miles. Blake stirred in the boat, sufficiently to rouse us from our torpor, and we followed his gaze to the cloud, which, for the briefest of instances, could, in fact, have been mistaken for a sail. But only by a novice. And Blake had been at sea since a child.

So we looked back to him from the object of his interest, and saw, and wondered at the expression of hope, as clear as if he bore a placard to that effect upon his chest. And we stared at its persistence for the longest time, until we saw it vanish, and his mind devolve to that conclusion obvious to the rest of us at a cursory glance. And then he was mad.

Why should one write it one way rather than another?

Excerpted with permission from Argo-Navis, from Three War Stories: Novellas © 2013 by David Mamet.

Author Bio
David Mamet is a stage and film director as well as the author of numerous acclaimed plays, books, and screenplays. His play Glengarry Glen Ross won a Pulitzer Prize, and his screenplays for The Verdict and Wag the Dog were nominated for Academy Awards. He lives in Santa Monica, California.