Are You Ready To Get Tatted Up With Digital Tattoos? 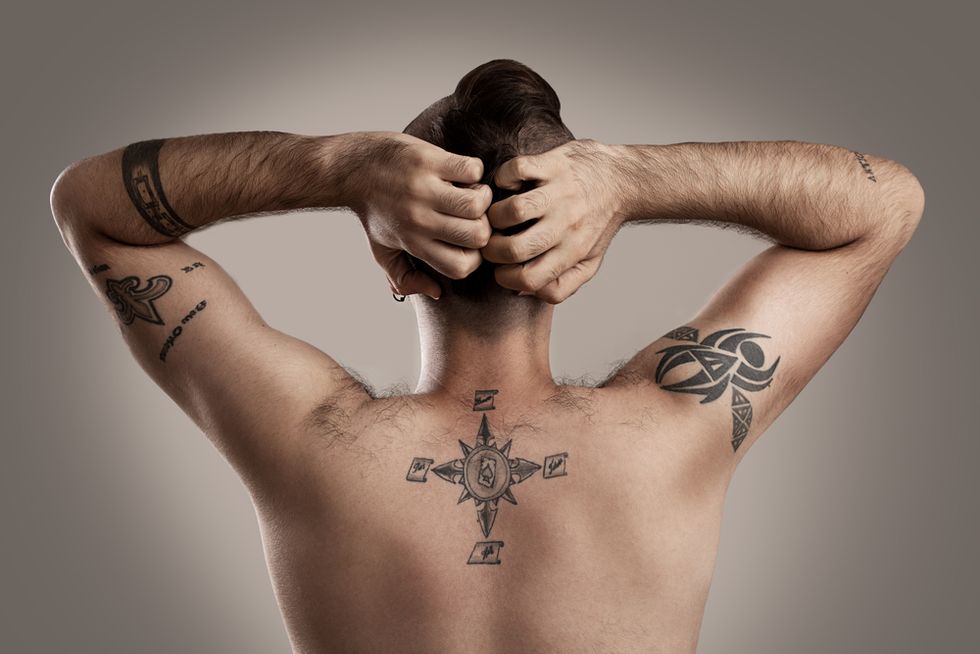 We’re already used to describing our online social identity as a “digital tattoo” – something that we carry with us permanently wherever we go. So what if it were now possible to get a real-life digital tattoo that would extend our online social identity into the physical world as well? In its exploration of futuristic new password schemes, mobile phone giant Motorola is mulling over the idea of electronic tattoos that could be implanted on your skin and be used as passwords for your digital devices. In fact, according to Motorola's Regina Dugan (ex-DARPA), there's a chance that the next generation of Motorola phones (which are actually Google Android phones) would come with the ability to recognize electronic tattoos.

But even if these "badass" electronic tattoos become available, would you get one? As with any of the "creepy or cool" technologies these days, it's not just about the feasibility of the underlying technology, it's also about the enormous cultural, ethical and moral implications of using that technology.

Ever since Motorola’s Regina Dugan discussed electronic tattoos at the All Things D conference at the end of May, the Internet has been buzzing with speculation about how exactly a digital tattoo might work. Based on the name of one company – mc10 – that Dugan mentioned at the event, the most likely scenario would be the implantation of tiny sensors, circuits and gauges on the epidermal layer of human skin. This would make them waterproof and impervious to stretching and twisting, while still enabling them to register or send digital pulses capable of being recognized by your smart phone. They could also act as mini-labs beneath your skin, taking the electrical signals from your body and combining them with readings about your heart rate or body temperature to deliver a complete picture of your body's health. Best yet, these electronic tattoos could be disguised as a regular tattoo, meaning that absolutely nobody has to know that you’ve been tatted up by Motorola (or Facebook or Samsung or Apple or any other technology company).

And, since these electronic tattoos (or, “epidermal electronics,” if you prefer) could be removed at any time, they would mark the next major step in the transformation of the wearable technology market. You would "wear" these tattoos until it's time to change your password. The problem - until now - was that there was always something inherently geeky about wearable tech – even something like Google Glass. Presumably, tattoos would change all that by affiliating wearable tech with what used to be – until recently – a cool underground subculture. Up until about 20 years ago, the only people who got tattoos were rock stars and other badasses (and the boys and girls who love them). Then, it was just the hipsters. Now, even moms and teachers get them.

The fact that tattoos are mainstream probably means that you wouldn't just get one tattoo -- you'd get several. Talk to anyone who's ever gotten their first tattoo and they'll probably tell you that the very act of marking one's body is strangely addictive. That means that, given our society's proliferating use of digital devices, you might want to get several different electronic tattoos, one for each device. That tribal tattoo on your bicep might unlock your phone, while that butterfly tattoo on your ankle might unlock your tablet. Different parts of your body would become different passwords (and portals) to various parts of your identity.

What’s interesting about this concept of the electronic tattoo, of course, is how much its meaning might change across different societies and different cultures, no matter how similar these societies may appear to be in their universal embrace of digital devices. In the USA, for example, we view tattoos as something that is intensely personal – we select to have specific tattoos imprinted on our skin and our bodies out of choice. We view them as a natural form of expression – a way to telegraph what’s important to us, to show others what we believe in, and simply as a form of wearable art.

However, that’s not necessarily true in other cultures. In Nazi Germany, for example, tattoos were applied forcibly during the Holocaust as a way of marking people targeted for death by Hitler. In the Russian prison culture that grew up during the era of the Soviet gulags, tattoos were imposed by your fellow prisoners rather than something you self-selected for yourself. According to an amazingly sophisticated tattoo system that was implemented across the Russian Gulags, each tattoo came to have a specific meaning. When you were transferred to a new prison within the gulag system, your fellow prisoners carefully studied what had been marked and imprinted on your body. Most tellingly,a criminal body devoid of tattoos was a prisoner devoid of status.

So, when we get electronic tattoos, which cultural tradition are we really embracing? Are we letting others brand us (whether it's corporations or governments), or are we branding ourselves? If someone had asked this question before the NSA spying scandal (and associated fears of an Orwellian state), the answer might have been that we are choosing a new, digital way to express ourselves and enhance our everyday lives. Now, the answer is not so obvious. If our online identity is a digital tattoo– are we now carrying that digital tattoo into the offline world - enabling others to brand who we are, for the rest of our lives?