From his very first response, President Obama looked hollow eyed, uninspired and uncharacteristically nervous. Romney was ruddy faced and determined. Subtly playing down his Bain Capital plutocrat image, he had a less than a million-dollar haircut and wore kind of a frumpy suit. He went on the attack. He appeared, for the first time in the campaign, to have convictions.

But will it matter? Will Obama’s slender 4-point lead in the national polls close up in the wake of this debate? Is this a game changer for Romney?

Robert de Neufville, my fellow Big Think blogger, isn’t worried. I am. Here is our Twitter conversation from Wednesday evening: 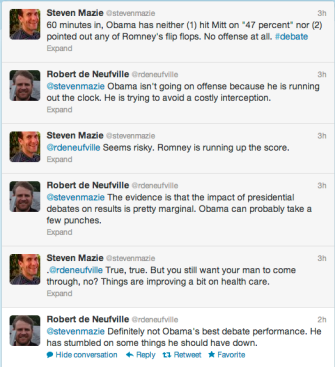 Robert is right that “the impact of presidential debates is pretty marginal.” Here is Dylan Matthews’ useful summary of the research showing that only twice have televised debates really moved an electorate:

[T]he effect is small, with an average shift of 2.3 percentage points, and it’s hard to infer causality with such a small sample. In any case, only two elections — 1980 and 2000 — saw the candidates trade places in the polls following the debate, and in every case the poll leader after the first debate won the electoral college. So Obama can rest easy assuming he still leads after tonight.

So a reasonable best guess, based on the historical precedent and without considering any factors specific to this race, is that Mr. Romney will gain a point or two in the polls by next week, while Mr. Obama’s number will hold steady.

Given the way the debate played out, Romney may move more than just one or two points in the national polls. This instant, unscientific NBC poll hints at that: 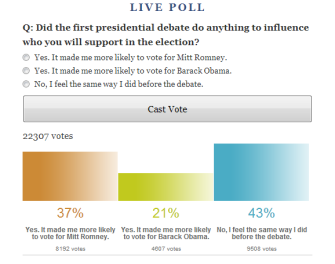 Thirty-three days and three debates remain before Election Day, and the impact of Romney’s surprise victory on Wednesday may fade from memory. But if the President does not assert himself in this final stretch of his last campaign, this will be recalled as the day his re-election bid turned south.

De-extinction, if it is ever possible, will not be simple.
Up Next
Surprising Science

To Clean Up Space Junk, Use A Harpoon

Today, a UK team presented a system designed to address the need to remove the many objects currently in orbit around the Earth.