As Obama and Romney attack each other for waging “class warfare,” a new study from the Public Religion Research Institute shows how little anyone really knows about the largest block of American voters: the white working-class.

As this graph from the report illustrates, 36 percent of the electorate falls into this category. It’s by far the largest slice of the pie: 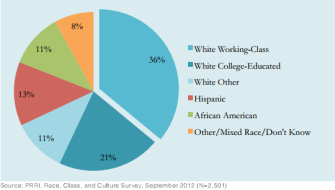 What image comes to mind when you think of the white working class? (We’re talking about “non-Hispanic white Americans without a four-year college degree who hold non-salaried jobs.”) Try this little true/false quiz and then read the full report for a range of often surprising results:

– Working-class whites are more likely to shop at Walmart than at Target (True: they prefer Walmart by a margin of 56 percent to 33 percent, while college-educated whites opt for Target by a 60 percent to 30 percent margin.)

– Working-class whites are big Tea Party supporters. (False: “White working-class Americans (13%) are no more likely than white college-educated Americans (10%) to say they consider themselves part of the Tea Party.”)

And now for the biggie:

– Working-class whites are more likely to vote for Romney on November 6.

The statement, as you might expect, is true. According to the survey, Romney enjoys a 15-point lead over Obama (48 percent to 35 percent) among this group of voters. Here is the full picture from mid-August, before the party conventions: 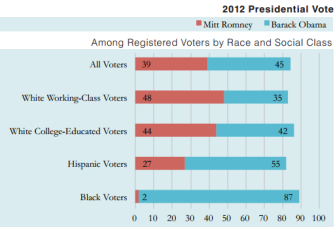 The surprise in the report isn’t Obama’s relative weakness among working class whites — his campaign strategy has been built around that fact for at least the past year. The curiosity lies in the demographic breakdown of this group into gender, religion and — most remarkably —region: 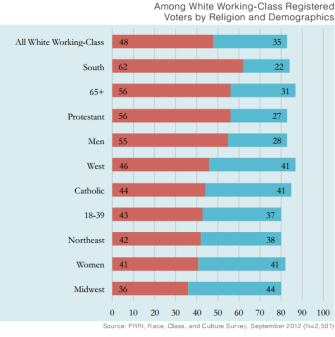 Yes, that’s right: the survey shows Romney enjoying a whopping 40-point advantage over the President in the South. Meanwhile, in the Midwest Obama has an 8-point edge over Romney among the white working class while the West and Northeast lean slightly in Romney’s direction.

The lesson for Obama? A few decades after the GOP first used the race-baiting “Southern Strategy” to piece together national victories by scaring white southerners suspicious of civil rights, the Democratic party can write off the South and still win. This isn’t encouraging from a sociological standpoint — indeed, the Public Religion Research Institute survey shows that half of working-class whites in the South think the country is paying “too much attention to the problems of blacks and other minorities.” But at least xenophobia is less influential in the national picture than it once was.

Jaron Lanier: if we don’t learn to acknowledge that real people are actually creating the value online, we’re never going to learn how to create the information economy that can really create employment and self-determination.