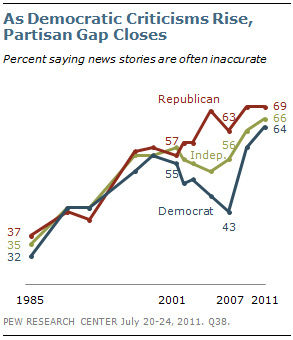 In September 2011, Pew released the latest in its annual “Views of the News Media” survey, showing that Democrats have moved closer to Republicans in their dissatisfaction with the performance of the news media.  Across questions asked, of particular note were the trends above that showed that about 2/3 of partisans of all stripes believe that news stories are often inaccurate.

This follows a dip for Democrats in 2007-08 when a press strongly critical of President Bush and Republicans combined with favorable election trends likely provided the grist for a more positive estimate of the media’s performance.  Of relevance, perceptions of political bias among Democrats follow a similar trend line, dipping in 2007-08 and then rising again in 2011, though about half of Democrats in 2011 view the media as biased (54%) compared to about 3/4 of Republicans (76%).

At the Washington Post, in a April 27 article, media reporter Paul Farhi offered an excellent overview of the factors that might be driving perceptions of media bias among the public. Below is an elaboration on several causes that Farhi highlights:

This last cause is a common finding in the literature across studies and topics.  As I have written with my colleague John Besley in a recent study, this psychological tendency even likely accounts for why elite groups like scientists hold a pervasive belief in media bias, despite a mainstream media that typically covers science in strongly favorable terms.

Here’s how my AU colleague Lauren Feldman and I explained the process driving this “hostile media phenomena” in a recent book chapter on the social psychology of political communication, drawing in part on some of Feldman’s own work in the area:

Across national settings, there is an ever pervasive belief in various forms of media bias.  In the U.S., over the past two decades, the dominant belief regarding media bias is that that the mainstream news media favor liberal causes and political candidates.  Yet, when researchers conduct content analyses to search for systematic patterns of partisan bias in coverage of elections, across studies they are unable to find definitive evidence (D’Alessio D. & Allen, 2000).  If social scientists using the best tools available to them find it difficult to observe hard evidence of liberal bias, why are beliefs among the public so widespread?  Moreover, across country setting and issue, what explains the difference between subjective perceptions of media bias and objective indicators relative to coverage?

In research on perceptions of the news media, credibility is understood as a subjective assessment, influenced by the partisan or ideological background of the audience and the claims about bias that might emanate from trusted sources such as political commentators or like-minded friends.  In the U.S. context, these claims are typically focused on a liberal bias charged by conservative elites and reinforce a widespread belief among conservative-leaning audiences (Watts, Domke, Shah, & Fan, 1999).  Audiences, then, do not typically assess story content on its own merits but rather on the basis of preconceived notions about the news media – often stemming from journalists’ tendency in many stories to cover and reflect on their own potential liberal bias. A number of other studies have also suggested that individuals’ expectations for bias in a news source or in the media, more generally, are likely to influence their perceptions of bias in news coverage (Arpan & Raney, 2003; Baum & Gussin, 2007).

Perhaps the most crucial determinant of perceptions of bias in the news, however, is the extent to which news coverage is seen as disagreeing with one’s own views. Individuals who feel most strongly about an issue tend to see their own side’s views as being more a product of objective analysis and normative concerns, and less influenced by ideology, than the other side’s views (Robinson, Keltner, Ward, & Ross, 1995).  This human tendency translates directly to judgments about the media.  In a range of studies, when news audiences who hew to opposing sides on an issue are given the same news coverage of the topic to evaluate, both view this identical coverage as biased in favor of the other side (Gunther & Schmitt, 2004; Vallone et al., 1985). The phenomenon is commonly referred to as the “hostile media effect.”  Researchers believe that the explanation for this hostile media effect is selective categorization: opposing partisans attend to, process, and recall identical content from a news presentation but mentally categorize and label the same aspects of a story differently – as hostile to their own position (Schmitt, Gunther, & Liebhart, 2004).

The original hostile media effect assumes that news coverage is inherently balanced.  The relative hostile media perception (Gunther, Christen, Liebhart, & Chia, 2001) relaxes this assumption, making it applicable to news that is slanted in favor of or against a particular issue. In the presence of the relative hostile media effect, supporters and opponents of a given issue perceive bias in a consistent direction (i.e., leaning toward one side), but each group perceives coverage as significantly more unfavorable to their own position relative to those in the other group.  In other words, partisans perceive lessbias in news coverage slanted to support their view than their opponents on the other side of the issue.

Interestingly, then, whereas the implication of the original hostile media effect is a partisan public perceiving media bias where none was present and thus potentially rejecting useful information, the implications of the relative hostile media effect are somewhat different.   Of consequence here is that partisans will fail to recognize bias in news that is in fact biased, in instances when that bias is congruent with their pre-existing views.   This bias against news bias is troubling.  Americans’ trust in news sources has become deeply polarized in recent years – with Republicans, for example, attributing more credibility to the conservative Fox News and less to most other news organizations than Democrats (Pew Research Center, 2008).  In other countries, similar perceptions of a left or right bias to news or alternatively a bias relative to national or ethnic identity exist.

In each context, as news – particularly on cable TV and online – is infused with increasing amounts of opinion and ideology, this may make it even easier for partisans to validate their personal political beliefs – by accepting at face value information that comports with their views while rejecting information that advocates for the other side. Thus, the relative hostile media effect may not only reflect partisan divides in news perceptions but may also contribute to the further polarization of political attitudes and knowledge across political systems.

Albert Einstein played a mean violin.
Up Next

Thomas Mann of the Brookings Institute and Norman Ornstein of the American Enterprise Institute have a must-read essay in today’s Washington Post titled “Let’s Just Say It: The Republicans Are […]