In a previous post, we shared with you the striking images of Nickolay Lamm, who applied data on sea level rise to contemporary images. In other words, what would the Jefferson Memorial look like under 25 feet of water? It is difficult to imagine that, and that is why Lamm’s renderings are certainly worth more than 1,000 words.

The illustrator/author Ron Miller is another practitioner in this genre, and while his illustrations deal with the consequences of man’s actions — whether it is rising sea levels due to climate change or nuclear war — he also contemplates the kind of destruction that might be in store for our planet and our solar system long after humans, and all life on Earth, is gone.

The image above depicts Miller’s view of what a swarm of meteors pummeling Manhattan would look like. The image below depicts a frozen Statue of Liberty after a rogue planet has disrupted Earth’s orbit. 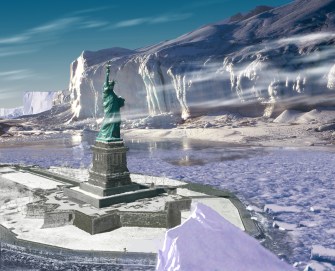 Eventually the sun itself will be extinguished, and Miller contemplates what that would look like too.

Guess which country has 269% inflation.

What do physicists actually mean when they talk about the multiverse?
▸
9 min
—
with
Sean Carroll
Starts With A Bang

The image above shows the “burn scar” left from the Dolce fire that has devastated the area around Prescott, Arizona.