Do you ever stay up late and then curse yourself the next morning when your alarm clock wakes you up? Jerry Seinfeld has the same problem. He’s got a pretty good idea of why it happens, too, he just doesn’t have a great solution yet. In the opening monologue to The Glasses in Season 5, Jerry complains:

The idea that there’s a cast of characters inhabiting your body at various times, getting in each other’s way, may not seem like a sound psychological theory, but it’s actually not too far off. Research shows that when people think about themselves in the future, it’s almost like they’re thinking about another person (see here and here). Recent findings by NYU’s Hal Hershfield and his colleagues even suggest that when we think of ourselves in the future, the neural circuits that we recruit can be the similar to the ones that we use to think about others, not about ourselves.

It’s not that Night Guy doesn’t care about Morning Guy at all, it’s just that he doesn’t think of him as a later version of himself, but as somebody else entirely. So Night Guy goes out drinking with his friends and Morning Guy gets stuck with the hangover. Worse still, Night Guy’s got friends. There’s Young Guy who doesn’t save enough money for Old Guy to retire, Hungry Guy who leaves Fat Guy with a beer gut, and Invincible Guy who has better things to spend his money on than health insurance for Sick Guy. They might sound kind of like superheroes, but despite their great power, they’re not so great about responsibility. So what is poor Morning Guy supposed to do?

Jerry does have one potential solution, but it’s a little impractical. He says that, “the only thing Morning Guy can do is try and oversleep often enough so that Day Guy loses his job, and Night Guy has no money to go out anymore.” Hershfield and his colleagues have a different approach – one that won’t cost you your job. They find that you can get Night Guy to be nicer to Morning Guy if you just introduce them to each another. 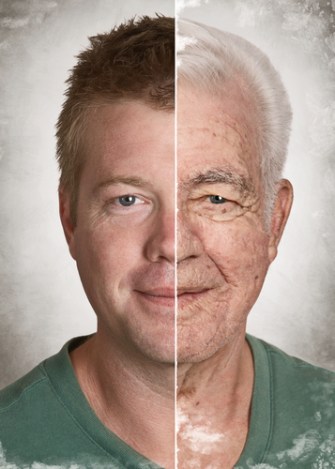 One clever way they have done this is to show people pictures of themselves that have been digitally aged. When people see older versions of themselves they become more likely to see their current and future selves as the same person. As Hershfield explained to me, “these types of interventions help people realize that their future selves are ultimately dependent on the choices that they make today.” He finds that this leads people to save more money for retirement than they would have otherwise and they also become less likely to engage in (short-sighted) delinquent behavior, like cheating. If you don’t have digital aging software on your computer, a low tech version that’s also effective is to write a letter to your future self. So if you have trouble going to sleep at a reasonable hour, or saving for retirement, or really doing anything today that won’t pay off until tomorrow, you should consider becoming better acquainted with Future Guy today – otherwise he’ll probably get screwed by Procrastinating Guy again.

How To Donate Your Smartphone’s Power To Science

If it runs Android, you can install an app, created by designers at the University of California-Berkeley, that will let the phone crunch data during downtime.