May 1, or May Day, or the Feast of St Joseph the Worker, the patron saint of workers, is a day that workers were traditionally given off following the planting of the fields that later became a bank holiday and is today an annual occasion for displays of social unrest throughout much of Europe.

This holiday is not widely celebrated in the United States. Nonetheless, we are taking the occasion to survey labor memes and what it means to work, or search to find work, in 2013.

With anti-austerity fever intensifying throughout the euro zone countries, May Day this year has seen thousands of protesters taking to the streets, and a general strike in Greece.

Here is one of the many austerity memes that has been making the rounds today: 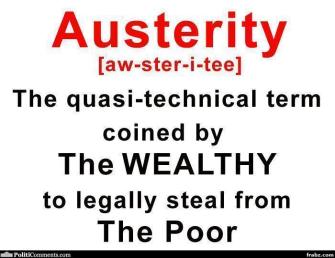 2. What Are the Best Places to Work?

Google sits atop Fortune’s 100 Best Companies to Work For list, but in the video below, Marc Cenedella, the founder of TheLadders.com, says the best job is working for yourself.

3. The Worst Places to Work

True, the number of workers in China’s Coal Mining Industry who die every day has gone down in the past few years, but China’s mines remain some of the deadliest in the world due to lax regulation and corruption. Some watchdogs estimate that the true death tolls might be twice what is reported by the Chinese government.

What is the worst (read: deadliest) place to work in the U.S.? A study released by the Centers for Disease Control and Prevention found that workers on offshore oil and gas operations are more than seven times more likely to die on the job than other workers.

After receiving a beating in the blogosphere and the court of public opinion for banning employees from working from home, Yahoo yesterday revised its paid leave policy for new parents. However, not everyone was so impressed.

As Ned Resnikoff writes on MSNBC.com, “For working America, the trend over the last few decades has been towards lower wages, fewer workplace rights, and diminished voice in the public sphere.”

“And the Band Played On” Challenges Today’s Definition of Urgency

One of the most memorable moments in the HBO film And the Band Played On, honored at this year’s Tribeca Film Festival to celebrate the film’s 20th anniversary, is a […]