Former Rhodes Scholar, NBA star and U.S. Senator Bill Bradley has consistently ignored advice and surpassed expectations throughout his career. In a recent interview with Big Think, he tells us that what guided him was a belief in himself, and a desire to always aim high.

We all remember that kid in high school who was good at everything. The captain of the football team and straight-A student, who got the lead in all the school plays, but you may not find anyone out there who bucks the trends and defies others’ expectations the way Bill Bradley has done throughout his life. 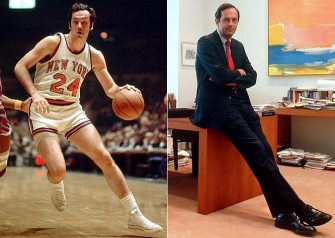 He’s the Rhodes Scholar who became an Olympic Gold Medalist. The power forward for the NBA Champion New York Knicks who became a US Senator and a presidential candidate. He’s not just the overachiever who followed a predetermined path laid out for him. In most cases, he followed his intuition and went against the grain, doing what he believed he would enjoy and therefore, what he would excel at. And it worked!

Bradley is the author of a new book called We Can All Do Betterwhich describes his vision for revitalizing the economy and the U.S. political system.

Taking lessons from the basketball court to the Senate floor, Bradley has seen, firsthand, how selfless leadership has generated the best results from other team members and helped them reach their goals faster.

As the world is becoming more connected, the hierarchies that once existed in organizations are breaking down and being replaced by collaborative teams of people working toward the same goal. There are fewer corner offices for executives and more break out rooms for team brainstorming sessions. With the emergence of this team atmosphere, comes the increasing need for excellent team leaders.

Here are some effective ways to influence a team’s energy and catalyze inspiration among its members.

Give credit where credit is due. Taking time to notice the accomplishments or contributions of your team members provides them with the motivation and confidence that are prerequisites to inspiration and action.

Give people room to fail. Instead of considering errors as mistakes or setbacks, consider them experiments in innovation. Innovation is the key to success and without the freedom to fail, an innovative spirit can’t thrive.

Encourage team members to play to their strengths and improve on their weaknesses. Are you in the habit of delegating tasks to team members according to their strengths but to the detriment of improving on their weaknesses? For the same reason teachers call on the students who never raise their hands, as a team leader, it’s important to delegate responsibilities that may be outside of a team member’s comfort zone. Change inspires growth and creating the self-fulfilling prophecy among your team members that they are adept at tasks they typically shied away from in the past, will catalyze this change within them.

Solicit Feedback. When your team members feel they can approach you and have their ideas truly heard, they’re more likely to bring forth suggestions for improvement, which can lead to creative and collaborative solutions.

Antonin Scalia died February 13, 2016, a day before Valentine’s Day. The conservative darling defended your right to abstain from broccoli and from health insurance, but he won’t stand up for your right to pleasure yourself.