The New York Times reports that an MIT statistics professor has found that flying on a commercial jet has never been safer. Not that it was ever that much of a risk, the occasional tragedy notwithstanding. But with no crashes in the last four years, the story reports:

In the last five years, the death risk for passengers in the United States has been one in 45 million flights, according to Arnold Barnett, a professor of statistics at M.I.T. In other words, flying has become so reliable that a traveler could fly every day for an average of 123,000 years before being in a fatal crash, he said.

What a foolishly naive way to put things, measuring risk with these sweeping averages. And even when we get the risk numbers right, how ridiculous it is for the numbers people to assume that if the statistical risk is low, our fears should be low too. Risk, both statistically and emotionally, is way more complex than that.

A few years ago, I wrote about all this for the PBS science series NOVA, for a program they were doing about the risk of flying. The risk of flying provides a wonderful example of how tricky it is to figure our how risky something actually is. It is certainly much more complex than simplistic general averages. Here is the link to that piece, which offers supporting graphics and other interesting tidbits. If you don’t want to click over, though, here’s what I wrote (in 2006). (Happy flying!)

Trying to judge whether a particular risk is big or small is, well, a risky business. There’s a lot more to it than you might think. Flying in airplanes is a case in point. You’d think that you could just find out the numbers—the odds—and that would be it. The annual risk of being killed in a plane crash for the average American is about 1 in 11 million. On that basis, the risk looks pretty small. Compare that, for example, to the annual risk of being killed in a motor vehicle crash for the average American, which is about 1 in 5,000. But if you think about those numbers, problems crop up right away.

First of all, you are not the average American. Nobody is. Some people fly more and some fly less and some don’t fly at all. So if you take the total number of people killed in commercial plane crashes and divide that into the total population, the result, the risk for the average American, may be a good general guide to whether the risk is big or small, but it’s not specific to your personal risk.

Then there’s another numbers problem: what denominator are you using? (For the math-challenged, like me, that’s the number at the bottom of a fraction.) You can calculate the risk of flying by:

3. Dividing the number of victims into the total number of miles all of them flew, which gives you the risk per mile.

They all produce accurate numbers, but which one is most relevant to you depends on your personal flying patterns. Some fliers take lots of short flights and some take longer ones, for example. Since the overwhelming majority of the few plane crashes that do occur take place in connection with takeoffs and landings, the risk is less a matter of how far you fly and more a matter of how often. If you’re a frequent flier, then the risk per flight means more. For occasional long-distance fliers, the risk per mile means more. A frequent, long-distance flier would want to consider both.

Here’s another number problem with the risk of flying: do you calculate the risk on the basis of one year, or an average of five years, or 10, or 20? Most years no plane crashes occur, or at least very few. So the number of victims per year goes up radically in years when there are crashes. Just look at the spikes in the number of deaths from plane crashes by year in the accompanying graphic 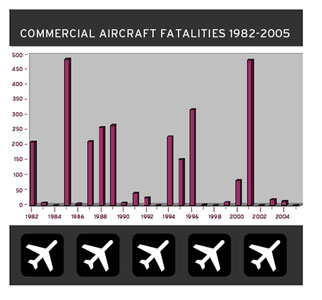 So to calculate the risk per year can be misleading. One really bad year would skew the numbers toward the more frightening. A year with no crashes makes it look like it’s zero. But if you average things over, say, five years, or 10, some other factors muddy the waters. In the last five years safety factors have changed. Advanced weather radar has been installed near major airports, and new FAA rules have gone into effect. A 10-year average might be misleading too. It would include the aberration of September 11, 2001.

Despite all these caveats, numbers are a great way to put risk in general perspective, and there is no question that by most metrics, flying is a less risky way to travel than most others. But wait: just when you thought it was safe to use numbers to put risk in perspective… Numbers are not the only way—not even the most important way—we judge what to be afraid of. Risk perception is not just a matter of the facts.

It’s also a matter of the other things we know (e.g., airline companies are in financial trouble) and our experiences (maybe you took a really scary, turbulent flight once) and our life circumstances (my wife was more afraid of flying when our kids were little). And on top of all that, several general characteristics make some risks feel scarier than others. Researchers in psychology like Paul Slovic and Baruch Fischhoff have found that when we have control (like when we’re driving) we’re less afraid, and when we don’t have control (like when we’re flying) we’re more afraid. That probably explains why, in the first few months after the 9/11 attacks, fewer people flew and more people chose to drive. Driving, with its sense of control, feels safer. Studies at Cornell and the University of Michigan estimate that between 700 and 1,000 more people died in motor vehicle crashes from October through December of 2001 than during the same three months the year before.

Another “feelings factor” that informs our perception of risk is awareness. The more aware of a risk we are, the more concerned about it we are. Which explains why, when there is a plane crash in the news, flying seems scarier to many of us, even though that one crash hasn’t changed the overall statistical risk much.

People are also more sensitive about risks that are catastrophic, which kill people all at once in one place, than we are about risks that are chronic, where the victims are spread out over space and/or time. Plane crashes, therefore, get more media attention than, say, heart disease, which kills 2,200 people in the United States each day, just not all in one place at one moment.

Then there’s the factor the researchers call dread, which is basically a measure of suffering. The more awful/painful/nasty a way to die it is, the more afraid of it we are likely to be. What happens to people in a plane crash feels pretty high up on a list of awful/painful/nasty ways to go. It sounds a lot worse—and scarier—than dying of heart disease, for example, even though the likelihood of dying from heart disease is much higher (1 in 400 per year, for the average American.)

The challenge, then, in making an informed decision about the risk of flying, or any risk, is to balance these three components—the numbers about that risk (especially those that are most relevant to you), all the other things we know and our life circumstances, and the affective feelings the risk triggers. That way the choices we make, to fly or drive for example, will include what is right for each of us but will also hopefully be more in line with the scientific facts, and that should help us live healthier

So anyone who’s ever really thought about love knows that our techno-liberated world is pretty weak on talking about love and death.  We’re either too vulgar or too vague.  It’s not […]